Monkstown’s Shane Irwin will have a busy few months ahead, as he closes off his second year of training as a PGA Professional.  The Limerick native has spent two years in Cork, working with Cian McNamara in the Monkstown ProShop.  In September 2017 he started his PGA training, having worked in the US and South Africa prior to that.  It was the next step in a plan for Shane.  “First year was very interesting for me as I went straight to the states to work in the golf industry after my leaving cert, so it was all a new experience for me” explained Irwin.  “Going to the states was in itself a learning, the way the American golf industry works and the contacts and friends I have made benefited me greatly to bring all that knowledge back home to Ireland.  The plan was always do America and play in South Africa and come back to do my PGA studies.”  Traditionally the PGA apprenticeship was based around learning on the job, but the new degree level course has a robust syllabus and the academic side of the course is accredited by the University of Birmingham.  “It’s a pretty difficult course and very time consuming especially when we work in a shop, but you have to balance it” added Shane.  “Most amateur golfers don’t understand what’s involved in trying to become a PGA professional, it’s tough work not just giving lessons and playing.  Basically all the study and assignments have to be done in your free time outside of work hours at home.  It’s up to yourself to put in the work or not.  That makes the course even more difficult for people because we only have online lectures so it’s entirely up to yourself to learn and study.  It took me a bit of getting used to being honest at the start.  As for the practical side that is mostly done in everyday work regarding club repair, lessons, etc, so that’s comes part and parcel in everyday work.  It’s what being an assistant Professional is all about, learning your trade.”  With just four months left in this his second year Shane will have a busy start to the year.  In addition to the online lectures, study and assignments, Shane also has a week long stay at the Belfry to look forward to as part of the course.  In addition to the lectures, part of this year’s week long stay is a practical exam to build a club from scratch, getting the loft, lie, shaft head and grip together to pass.  This year’s class will also have a rules exam which will be based on the new rules which came into effect this month. 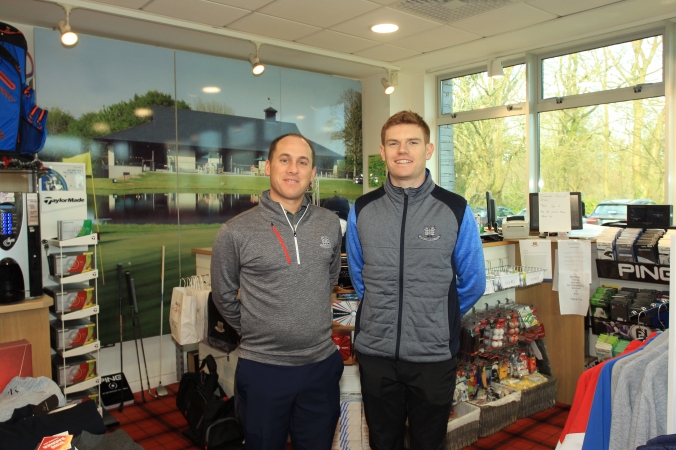 Although he’s another Limerick man in Monkstown, Shane has settled down and has been delighted with the welcome and ongoing support from the members in the proud Cork club.  “The members in Monkstown have been brilliant to me since I came in two years ago to join Cian in the pro shop.  They are nothing but supportive of me, and always wondering either about my own golf events or college.  It’s nice to hear people have a great interest in what you are trying to achieve.  Myself and Cian get on very well working together he is a fantastic professional to work under and I am very fortunate and privileged with the guidance he has for me in my PGA training.  Working with a great team with Elaine and Nick helps greatly in the process as we are all on the same page and help each other out when needs be.”  Outside of the proshop duties, Shane has been giving lessons and also running programmes for those starting out in the sport: “I have been teaching our junior players, in developing them into great golfers and more importantly good people.  Our club Junior Officer Donal McDonnell had been superb the past few years in helping us reach our goals in junior golfers development and process and it will pay off in the future.  As I always say you don’t want a child when their young to be forced to go to a golf club they will think of it as a chore, make them feel like their having fun so they will always want to come back.  In February I will be restarting my Junior Programmes for non-members and also restarting the ladies groups, working on their putting all the way back to driving.”

Adare a Favourite for Irwin

Shane was one of the lucky golfers to play Adare since it reopened and having worked in the US, he appreciates the level that the course is now at.  “Adare was one of the best manicured courses I have ever played” said Shane having played on the reimagined layout.  “Just the atmosphere there, from the range, chipping greens and putting greens nothing is out of place. What I could not get over was the run off areas around the greens and how steep they are.  Your short game needs to be on point and potentially seeing a Ryder cup should be fantastic and the course would suit perfect for match play golf.  The course itself would be on the same categories as the Baltusrol, Pine valley, Medalist and Isleworth level – or even better.  It’s great for Limerick and Ireland.”  In competitive action on the course Irwin was the first home winner of the Morgan O’Donovan Petpetual trophy in Monkstown in March.  He shot an impressive five under par 65 in the pro-am event to beat a strong field of professionals.  As a Limerick man, Shane also had a good summer following the hurlers.  Although he’s now based in Cork, there was little in the way of sympathy for Cork when they lost out to Limerick in the semi-final.  “I was not one bit sorry for the Cork hurlers they lost, the same day I was wearing my Limerick jersey roaring and shouting to beat Cork so that answers that question.  We had the Liam McCarthy Cup at home over the Christmas on the kitchen table one of my friends Sean Finn was playing and we were saying we might never see this cup again like this in our lives so we must enjoy it.  I’m pretty confident John Kiely will keep them level headed after the break and they will certainly give it a rattle again this year.”