Sara Byrne was back in the news last week when she won yet another award.  The Douglas teenager won the Cork City and County Youth Sports Award last week at a reception in the Metropole Hotel.  It was a great award to win, beating the 11 other monthly award winners to scoop the title.  This is the second award for Byrne, who was named the Irish Golf Writers Womens Amateur Golfer of the Year Award in December.  For Sara and her family it was a change to reflect on the successes of the year, although Sara was a bit more clinical in her review of the year when she accepted the award.  “2018 was a bit of a rollercoaster year” said the Douglas and Ireland golfer, “there were plenty of ups and downs and feeling frustrated at times, but the adrenaline rush is unreal when you succeed.  Last year gave me some really hard knocks but some magical moments also.  I’ve advanced my goals hugely, Irish Ladies Champion. Irish Girls Order of Merit winner, getting to +1 handicap and getting to into the top 100 in the WAGR rankings”.

There was more than that for the talented teenager.  She represented Ireland at three major international championships and received more than a dozen scholarships from American colleges.  Sara’s season started in March when she finished third in the Munster Womens Championship in Killarney.  Rounds of 74, 75 and 78 saw her claim a podium finish although she did miss out on retaining her Munster Girls title by one shot.  Despite playing well, she couldn’t manage to claim the top spot.  The pinnacle of the year came in June when she won the Irish Womens Close Championships in Enniscrone.  She was the first Cork golfer to win the title in almost two decades, coming through seven rounds of golf to claim her first senior national title. 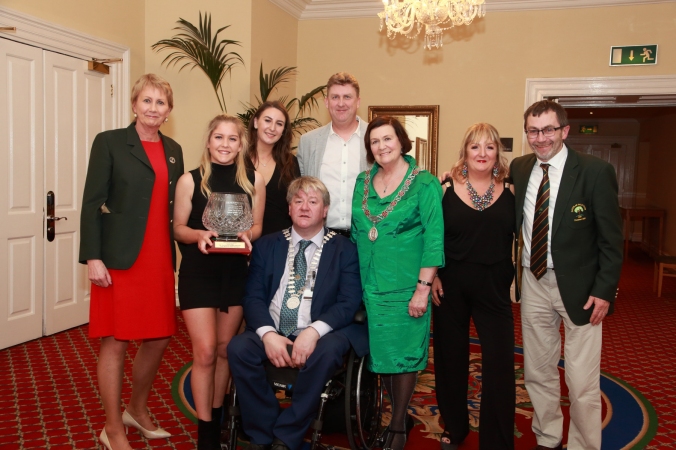 In August she went to Ballybunion for her second Irish Girls appearance at the home internationals.  It was a tough week for the Irish Girls, finishing in a tie for second place despite drawing with the winners England on the opening day.  The Douglas teenager was also selected as one of the three Irish golfers for the World Junior Golf Championships which took place in Ottawa in September.  The event, which was by invite only, saw twenty International Teams compete in Camleot Golf & Country Club.  Now that 2018 is in the past, Sara is focused on 2019, concentrating on a similar calendar of events to last year.  Accepting her speech, Sara acknowledged the support she has received and the dedication required.

“Golf is a very individual sport and takes a huge amount of commitment” added Byrne.  I started when I seven and my grandparents are in their seventies and still playing and that’s one of the benefits of the sport I suppose.  I’m so grateful to my coaches for all of the support I received this year, to Douglas Golf Club and the Jeff Gomez in the Emerging Talent Programme in the Mardyke Arena.”

Fota Island have just launched a new Parent and Child golf programme which includes 10 one-hour golf lessons that cover everything from rules to swing, putting and etiquette.  It provides adults and children an excellent way to learn a new skill together.  Fota are holding a Parent & Child information day this Sunday, 3rd February to give families a free taster session with multiple slots available at 10am and 2pm.  The Parent & Child membership at Fota Island Golf Club is available to any family member wishing to learn something new with the child in their life – so whether that’s granny & grandchild, big sister and little brother or uncle & niece, Fota Island Resort is the place to start.