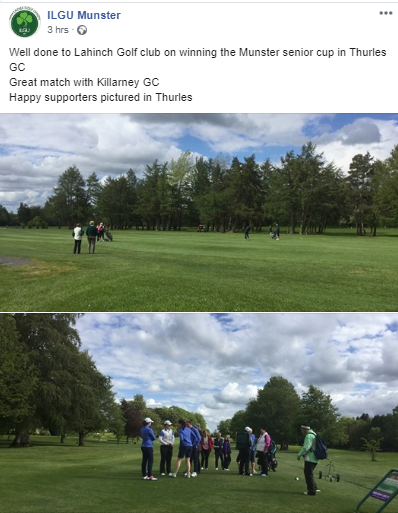 Douglas and Cork both made it as far as the semi-finals of the Ladies Irish Senior Cup which took place in Thurles over the weekend.  Douglas faced Kinsale in the first round and it was the city side who won.  Sara Byrne, Karen O’Neill, Clodagh Coughlan and Jemma Barry all recorded wins while Kate McCann halved her match.  While it was a good win for Douglas it should be noted that Kinsale gave up over 40 shots in total in the five matches.  In the second round Douglas were up against local opposition again, this time it was East Cork.  Douglas led from the start with Byrne, O’Neill and Coughlan winning their matches.  That was as good as it would get for Douglas as they lost out to Lahinch in the semi-final.  The handicaps were going against Douglas in this match, with 16 shots between the two sides.  Chloe Ryan and Sinead Sexton (both playing off +3) won the first two matches, and the contest was over when Lahinch’s Sarah Cunningham won on the 16th.  Lahinch would go on to have an impressive win over Killarney in the final on Sunday aftermoon.

Cork had a good start on Saturday with an opening win over Ballybunion in the first round.  There were wins for Rachel Thompson, Claire Coughlan Ryan and recently returned Paula Walsh while Miriam Abernethy and Ailish Thompson were called in.  In the quarter-final against Limerick there was another good performance with the wins coming from Thompson, Coughlan and Abernethy.  In the semi-final on Sunday they lost out to a good Killarney side, with Cork natives Mairead Martin and Valerie Clancy taking two of the four Killarney wins.  Mallow had a good win over Ballykisteen in the first round, there team was comprised of Jennifer Hickey, Mary Dowling, Susan Curtin, Carmel Kearney and Catherine Roche.  Unfortunately for Mallow they came up against a very strong Killarney side and lost their quarterfinal match.  The only other Cork team involved was Bandon who lost out to Limerick in the first round.