James Sugrue was the only Cork golfer to make it trough to the last 64 in the Amateur Championship.  After two strokeplay rounds in Portmarnock and The Island, the Mallow man finished in 46th place on +3 after two testing rounds.  Sugrue, with his usual partner Conor Dowling on the bag, was out on Portmarnock yesterday.  And like the majority of the field he found it a tough day.  While he commented the it was “insanely long”, he knew that a patient approach was probably the only way to survive the 7,000 yard course.  The wind picked up mid-morning and Sugrue couldn’t avoid a few bogies on the front nine.  A run of six pars was a welcome respite after pair of bogies on 8 and 9.  One more bogey followed and he signed for a 77 (+9). 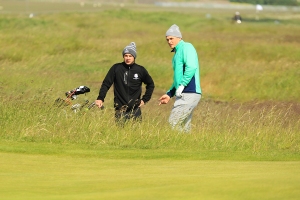 A better day followed today at The Island.  An opening bogey would help Sugrue turn on -1, and a crucial birdie on the 18th meant that he finished on two under and qualified with two shots to spare.  With 20 golfers on the cut mark of +4, a preliminary matchplay round will take place tomorrow for the final 12 places.  Sugrue will face 5th place qualifier Harry Hall in his first round match, they tee off at 10.53am,with Portmarnock hosting all matchplay rounds.  The 2017 South of Ireland winner should fancy himself against all comers once the matchplay starts tomorrow.  With a solid and patient game plan, he has every chance of advancing beyond the first round and challenge in the later stages.

Unfortunately there was no joy for Peter O’Keeffe or John Murphy.  O’Keeffe had an opening 79 after a windy morning in Portmarnock, and although he had a better day in the Island today, he missed out on a matchplay spot.  Murphy too failed to sparkle, he opened on The Island and a lost ball on the third hole set the tone.  He finished his opening round on +7, and today at Portmarnock he wasn’t able to get into the red.  He finished on the same mark as O’Keeffe on +12.  It was a disappointing finish for both golfers, but like 95% of the field, par golf wasn’t an option despite the high hopes that the Irish golfers had.  Caolan Rafferty and Eanna Griffin are the only other Irish golfers to make it though to the final 64, while Ronan Mullarney faces a preliminary match in the morning as 21 golfers battle for the last seven places.  The round of 64 will take start around lunchtime tomorrow and from there it will be a test of skill, nerve and stamina as the competition will run through to Saturday’s 36 hole final.