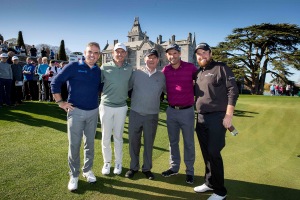 An additional 100 tickets will be tendered this month for the sold-out JP McManus Pro-Am, taking place at Adare Manor on the 6th & 7th July 2020. The tournament reached capacity on August 1st this year; however, due to unprecedented demand, The European Tour have released some additional tickets for public tender ahead of the sixth staging of the charity event.

Anybody wishing to submit a bid for a ticket cap, or number of ticket caps, is asked to now email tickets@jpmcmanusproam.com with their offer, full name and phone number. The highest bids will each receive the opportunity to purchase the cap or caps at the offer price they submitted.  The news comes as the no.10 ranked golfer in the world, Xander Schauffele, Ryder Cup stars Tommy Fleetwood, Tony Finau, Matthew Fitzpatrick & Tyrrell Hatton and former world boxing heavyweight champion Wladimir Klitschko join the field today.  Indeed, Fleetwood and Finau went head to head in the Sunday singles at Le Golf National last year and their addition to the Pro-Am line-up means that 13 players who competed in Paris have now been confirmed for another Ryder Cup venue, Adare Manor, next summer.

Golfers confirmed for the 2020 ProAm

Tournament host JP McManus explained the concept of the ticket tender:  “The main purpose of the Pro-Am is to raise funds for organisations most in need and it’s hugely exciting to have so many world-class players and celebrities supporting this effort.  By putting 100 tickets up for public tender, we hope to further increase the charitable fund, so anyone who wants them, please send us your offer and all monies will go directly to the charities.  I’d also like to welcome Wladimir, Xander, Tommy, Tony, Matt and Tyrrell to the field and thank them most sincerely for their commitment to the event.”

Outside of the ticket tender, the only other way to gain a ticket the Pro-Am is to enter a pre-qualifier.  there are four events with availability remaining, all taking place in April next year.  All entrants receive a Pro-Am cap which guarantees entry to the event, and golfers from each charity qualifier will also go through to the a final qualifying event where they will have the chance to play in the Pro-Am itself.  SO far there have been almost 40 qualifiers, each raising money directly for local charities in the mid west.  Over 150 amateurs have made it through to the final qualifier.