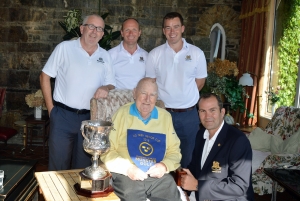 One of Monkstown’s most famous golfers Tom Egan passed away on Friday aged 89.  The Irish International dominated the amateur game for two decades in the 50’s and 60’s.  TW, as he was known, was Monkstown born and bred, his home was bordering the course and regularly jumped the wall to practice around the old fourth hole as a boy.

Egan’s practice played dividends and it showed when he played in his very first competition.  Just short of his 18th birthday he was given a handicap by the club, this normally didn’t happen until juniors turned 18.  TW was given a handicap of 12 and went on to shoot a 78 (66 nett) to win the 1947 President’s Prize.  His handicap was swiftly cut to six and he was down to scratch soon after.

Outside of Monkstown, Tom went on to win two major amateur titles in addition to a large number of local wins.  Having reached the final of the South of Ireland in 1951 he went on to win the Irish Close in 1952.  He defeated Joe Brown of Waterford at the fifth playoff hole at Cragivad (Royal Belfast).  His greatest performance came ten years later when he won the 1962 East of Ireland.  In the third round Egan blitzed the field with eight consecutive birdies on the front nine.  That was a record (amateur & pro) that would last over 40 years until Mark Calcavechia birdied nine in a row in 2009.  Egan’s wins include the Cork Scratch Cup in 1960 and 1969, Douglas in ‘59, ‘62 and ‘67, as well as wins in Muskerry and Castletroy.

In total Egan earned 54 caps for Ireland and his most celebrated performance in the green came in the final of the European Team Championship in Turin in 1967.  The final was nip and tuck until the Monkstown man produced a lengthy putt on the 18th green that saw Ireland win by 4 matches to 3.  One of his more recent outings on a course happened in 2004 when Baltray hosted an Irish open.  Tom was invited to play a round with Padraig Harrington and received a special award in recognition of that amazing front nine 42 years earlier.  Although he played for Cork GC in the Senior Cup in the early 50’s, Egan was always a Monkstown man first and foremost.  In 1963 he was part of the Monkstown Senior Cup team who won the Munster title, and he was very proud when the 2016 winning team called to him after the Munster final.  Tom is survived by his wife Angela and nine children Paula, Anne, Frank, Denise, Tommy, Michelle, Robert, Michael and Louise. 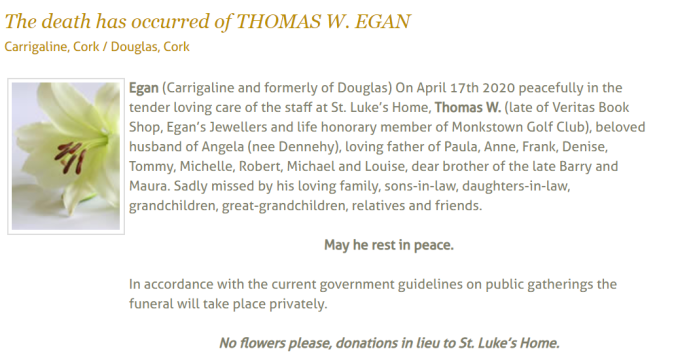