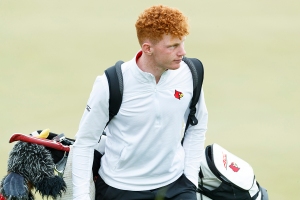 John Murphy has won a major US college golf award, he was confirmed as the winner of the prestigious Byron Nelson Award.  Three weeks ago Murphy was shortlisted as one of the three finalists and late on Thursday evening he was announced as the winner.  The Byron Nelson Award is awarded based on the winners golfing and academic performance as well as their character.  Although his senior year was cut short, the win was a great boost for the Kinsale man.

“I am still overawed to have been honoured with this award and to have my name mentioned in the same sentence as Byron Nelson,” said Murphy.  “To be recognised for what I do both on and off the golf course is incredible and I am so grateful that the committee put their faith in me.  I feel incredibly lucky and humbled to be the recipient of this year’s award and I will do everything I can to honour the award and the legacy that Byron Nelson has left.” 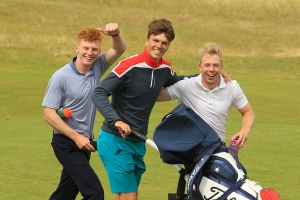 John Murphy enjoying himself with Shane O’Connell and Cathal Butler at the South of Ireland. Picture: Niall O’Shea

John returned to Kinsale in March following the cancellation of the final events of the college golf schedule.  He was housebound for the past seven weeks but last week he was back on the course in Kinsale, practicing and playing in preparation for the competitive season which should get underway in July.  One of the benefits of winning is that Murphy now has a place in the PGA Tour event, the AT&T Byron Nelson Classic which takes place in Dallas, Texas next May.  Although his plans to go to tour school at the end of this summer were scrapped, Murphy is now likely to remain an amateur until the event in mid-May.  He’s also considering a return to Louisville.  Although he was due to finish university this year, the cancellation of the NCAA college season in March resulted in all seniors being offered another year in college.  The extra year also means that Murphy will in contention for a place in the 2021 Walker Cup team.

The Byron Nelson Award is for college seniors and takes into account the entire collegiate academic and golf career, good citizenship, as well as his character and integrity while in college.  This was John’s third year in Louisville and he was recognised on several honour panels.  He achieved Ping All-Region selection a Ping Honourable Mention All-American, as well as an ACC-All Academic Team selection and a Srixon/Cleveland Golf All-America Scholar.

On the course Murphy had a great senior year in Louisville, he won two events and helped his team to three team wins.  He finished the season ranked at 64th in the NCAA rankings and he maintained his position inside the top 135 in the world amateur rankings all season.