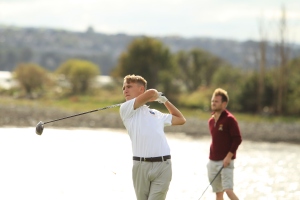 Golf is getting back to normal, there are plenty of golfers back on the courses in Cork although it’s a bit slower than many golfers would like.  Since Monday 8th June the sport entered the second phase of the return to play protocol which has been developed by the ILGU and GUI.  Both bodies have been proactive in getting golfers back on the course, golf was one of the first sports to be allowed to reopen.  Last week should have seen two major developments, the extension of the travel limit to 20km and the return of competitions.  While the travel limit was extended to the full county, competitions unfortunately have been deferred until the next phase at the end of June.

Despite having competitions included in phase two of the return to play protocol, Sport Ireland ruled that no sports should be holding competitions in the second phase.  The golf unions had a very comprehensive five-point plan in place but following further consultation and clarification with Sports Ireland they were forced to issue new guidance that competitions were not recommended until the next phase on 29th June.  While there was disappointment for many golfers, last week did mean that the 5km travel limit was ended allowing almost all members to play.  Under the 5km travel restriction many golfers were prevented from playing, especially in clubs outside of the city suburbs.  Full time sheets were in evidence across the county as clubs reported a much higher level of demand compared with the first three weeks.

Although many golfers have been critical about the stance on competitions, the unions have ensured that golf was one of the first sports to return and they have also created a detailed set of guidelines for clubs which highlights a safe pathway for the return of the sport.  Smaller groups, larger gaps between groups, limited access to on course facilities, and details around course signage and furniture all helped clubs to manage the transition under the new restrictions.

The work completed by the ILGU and GUI is a great signal for the future of the sport, when the two bodies become Golf Ireland at the end of this year.  As well as preparing for the transition to the single governing body, the unions have also been busy working with Sport Ireland and their clubs and membership.  Both bodies engaged with clubs to determine the appetite for holding inter-club competitions in 2020.  The ILGU clubs favoured the cancellation of inter-club competitions this year, while the GUI clubs have come out in support of a reduced number of events.  The GUI are also holding a number of championships including the Munster Strokeplay at Cork Golf Club which is scheduled for early September.