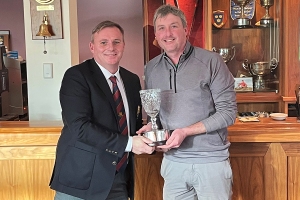 David Ryan picked up the first bit of silverware in the PGA season last week.  The East Cork Club Pro won the Irish PGA Southern Championship in Monkstown, beating an impressive field.  Ryan went around in 66 strokes and took the title by a single stroke.  “It was great to win last week said David, “it just goes to show there’s life in the old dog yet and it was nice to have East Cork GC after the name up in lights.”  Ryan is well used to winning on the Irish PGA circuit and he has racked up a number of wins in Monkstown, as well as previously winning the Southern Championship.

“I won the same event in Powerscourt in 2012 shooting the same score.  As for Monkstown golf club I love playing up there always have. It’s the type of course that suits my game.  It’s not the longest but you have to think your away around.  I’ve had a bit of success in Monkstown.  I’ve won the pro-am and also the Morgan O’Donovan event which was a nice one to win as Morgan was one of the nicest and best pros around.”

The event was actually from the 2021 calendar, one of several events that were affected by covid, and Monkstown was looking good for the early season tournament.  “The course as always was in great condition” added Ryan.  “For the time of year and for the weather we recently had it was playing long and there was a cold breeze which meant the ball wasn’t travelling as far as you would have liked.  The fairways and greens were in great condition but you must be in the right place off the tee to attack the pins.  I’ve played it enough times that I know what I can get away with and when I need to take my punishment.  It comes down to holing a few putts which I did at crucial times.” 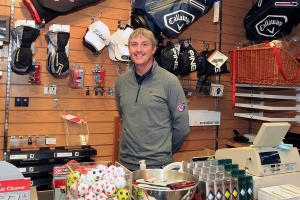 Ryan was playing alongside Damien McGrane, who has also won around Monkstown.  The pair ended up a few shots clear of the chasing pack and they were the only golfers to break par.  Ryan had got to five under thanks to birdies on the 4th, 7th, 12th, 14th and 15th but dropped a shot on the par three 16th.  After parring the final two holes he thought there was better score our there but it turned out that the two experienced campaigners were out in front.

“It was very close all the way. I was one ahead standing on the 16th at 5 under and we both bogeyed it.  Finishing with two pars I thought nothing of it.  With the score we both shot I thought I’d be in with a chance to win not realising level par was the best.  I was a bit surprised when I found out I was leading when I came in but it just goes to show how tough Monkstown is off the back tees.  It’s hard to score on.”

Ryan was appointed as Club Professional in East Cork in November 2020, and although he had to deal with covid restrictions for the first six months he quickly got to work once the course and range opened.  “It was very busy last year so I didn’t get much time to play because if I wasn’t in the shop I was teaching in the range.  I’m looking forward to this year as it will be my first full season in the club, lessons have taken off again like last year and I’ve just completed our ladies get into golf programme where we had 60 ladies sign up.  I’ve just started an 8 week course with the help of our junior conveyor and his committee and we have some great talent on hand.  We have a great junior section in East Cork and that’s all down to Ambrose Guilfoyle who puts in long hours with the juniors and arranging lots of activities and competitions for them.  East Cork golf club has been brilliant since I moved down. They gave a great interest in all aspects of golf and I love playing out on the course with members.  I hope to play more with them over the summer months.”

Although he’s looking forward to a busy year in East Cork, David is also hoping to be a regular at the PGA Irish Region events.  “I plan on playing a bit this year as I love the pro-ams and the pro-only events.  I usually bring teams of friends with me to certain courses and they love playing in them.  My wife Claire comes with me the odd time and she loves having the competition between the two of us as do I.  We have lots of events on in the region this year so I’m looking forward to it.