The Barton Shield is one of the most exciting amateur competitions on the calendar, the format is foursomes, and with just two pairs there is no room for passengers.  Muskerry dominated the competition for the past two years but this year Cork made a breakthrough.  They came through two weekends of matchplay golf, firstly to qualify from the 18 Cork clubs and secondly to get out of Munster.  Now they look forward to an All-Ireland semi-final in Carton House next month.  Cork started their campaign by winning their four matches in the South Munster qualifier in Monkstown, building momentum as they went.  Their toughest challenge came when facing Douglas in the venue final.  Although Cork built a lead in the front nine, Douglas responded taking the lead on the back nine.  Cork showed great resilience, Mark Ford and Paul Tobin won by one hole and Cork took the honours when Gary O’Flaherty and John Hickey halved their match on the 18th.  As it happened that would be Cork’s biggest test as they performed with style when playing at home during the Munster finals.  Despite the four players playing well in Monkstown, team manager John Carroll and assistant Padraig Dooley made a change to their line up for the matches in Cork.  With a panel of eight top quality players, there was always going to be a few tough choices for Carroll and Dooley.  “Paul Tobin played the earlier matches in Monkstown on the back of a runner-up finish in the Castletroy Scratch Cup and a 67 in a monthly medal in Cork GC” explained John Carroll.  “In the build up to the Munster Finals, Brian Kelleher shot a 67 in a medal as well as starting the Captains Prize with six consecutive birdies, so Brian effectively played his way on to the team.  Brian is a local lad who, along with Mark Ford, knows every blade of grass, bump and hollow, and most importantly every putt around Little Island.  Brian played great golf, especially in the final against Tramore so we were delighted that that decision paid off.  It had been a very tough decision, but ultimately it paid off.”

Although they had home advantage, Cork faced a tough semi-final against Limerick.  Limerick were reigning Senior Cup winners and had Pat Murray, Justin Kehoe and Michael O’Kelly on their side.  It was Limerick who took the lead, and they were three up after seven holes.  Cork turned it around however with a few key birdies around the turn and they played very well on the back nine to win by four holes.  Cork faced Tramore in the final and the Waterford side were missing Robin Dawson who was on international duty.  Cork were on a roll after their semi-final and after the sixth hole, Cork were three up in both matches.  The home side kicked on and while they had a comfortable lead, the team manager wasn’t going to celebrate prematurely: “I’ve been following golf long enough to know that it’s not over till it’s over, and I wasn’t celebrating until the final ball went in the hole. There were a lot more nerves in the area final against Douglas than in the Munster final against Tramore, due to the fantastic start we got.  With recent performances I wouldn’t say there was a lot of expectation on us to win, but there is certainly always an element of pressure especially at home.  I think a lot of people assumed we would win, because we were at home, but you still have to put the ball in the hole.” 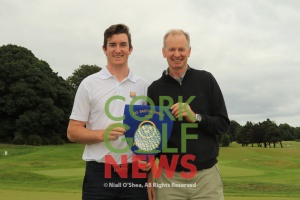 Although this is the third year that the AIG Cups and Shields finals have been held in Carton House, it’s the first time that Cork will head to the championship resort.  When they last qualified in 2013 the finals were held in Royal Tara.  Despite their proud history at national level (5 Senior Cups, 5 Barton Shields and 3 Junior Cups according to Carroll), it’s been 18 years since Cork last captured an All-Ireland title.  In 1998 Cork captured it’s fifth Senior Cup title.  Gary O’Flaherty and assistant manager Padraig Dooley were on that team which also included current Irish Seniors Open Champion Tom Cleary.  The last time Cork won a Barton Shield title was 1990 in Westport.  Tom Cleary also featured on that team as did Denis O’Sullivan.  In 1991 several member of the current squad were on the winning Irish Junior Cup team.  Ford and O’Flaherty were joined by Brian Kelleher and John Carroll when Cork won the national title in Malone.  “While Cork does have a strong heritage of winning All-Ireland’s we haven’t won a green pennant since 1998 which is a very long time” said Carroll, “especially for a club like us who should be competing at this level year on year out.  The bottom line is that this club should be competing at national level every year”, says Carroll, “and whereas we’ve reached finals over the last 15 years or so, we haven’t won a pennant.  There won’t be as much pressure on us in Carton House, coming up against other provincial champions with international golfers in their teams.  But we are going up there for one thing, and that’s a green pennant.  We are going to do our absolute best, and we are going to enjoy it.”

It’s going to be a busy few weeks for Carroll, Dooley and the panel of eight golfers.  As well as travelling to Carton for practice over the next two weeks, they’ll have to factor in that the semi-finals and final are mid-week which creates its own issues for amateurs.  “Our all-Ireland semi-final is on the Wednesday in Carton House and the GUI have very kindly given us two practice rounds on the Monday and Tuesday.  We will also head up there next week ourselves to play in an Open Singles just to have a look at the place.  Most of our panel have never seen the course before.  A few of our panel work on shifts, and a couple of them got married this year, so we are under a bit of pressure work wise.  We are all amateurs and this is an amateur sport, so unfortunately work comes first, but we will travel to Carton with the strongest panel possible.  We have a total of 8 players on the panel and if one player is unavailable then another will just slot into his position.”  Cork’s semi-final takes place on Wednesday 14th while Monkstown and Muskerry are both in action on Friday 16th.  Monkstown are in action in the AIG Senior Cup while Muskerry hope to repeat the success of 2007 in the AIG Jimmy Bruen Shield.

Cork Captain Damien Wallace was delighted with his side’s win in the Barton Shield, but he was also immensely proud that Cork were hosting the Munster finals.  “It was a fantastic occasion for Cork Golf Club to have had the opportunity to host the three Munster Finals” said Wallace, “It provided an opportunity to showcase our course and proved to be a hugely successful event with all participants acknowledging the quality and condition of the Course.  Our own staff under the guidance of our course superintendent Anthony Gillis worked very hard in the run up to the event to ensure that the course was presented in top class condition and this was certainly the case while our Secretary/Manger Matt Sands ensured that the logistics of everything worked smoothly, not least affording all the participants ample time to practice in the run up to the event.”  He was delighted too that the club will be heading to Carton House in three weeks’ time to contest in the AIG Cups and Shields finals.  “The success of the weekend was topped off by our own Barton Shield team winning the Munster Final and now progressing to the National Final in Carton House added the Captain, “We are absolutely delighted to have a Cork team back in a National Final and we are going to do everything in our power to bring back a National title to Cork.  Our team members who have played to date Gary, Mark, John, Brian and Paul under the guidance of our management team of John Carroll and Padraig Dooley have worked very hard to get to this point and I know that no stone will be left unturned in their efforts to secure a National pennant.  They will have the full support of all the members as they embark on the National campaign.”  It’s been a long time since Cork had three teams in the All-Ireland final stages of the cups and shields.  Last year Douglas and Muskerry made it through with both losing out in the semi-finals.  It’s 2014 since a green pennant came down south, when Muskerry won the Barton Shield.  While Wallace will have a strong bias for his own club, he also extended his best wishes to the three Munster representatives.  “I would also like to wish the other successful teams Monkstown in the Senior Cup and Muskerry in the Jimmy Bruen Shield every success as they also move forward to Carton House.  Munster will be well represented in Carton in September and I’m sure that Cork, Monkstown, Muskerry, Tralee and Nenagh will represent the province with distinction.”  The festival of golf runs for five days from 13th – 17th September at Carton House.

After two convincing wins in the quarter-final and semi-final of the ILGU Irish Senior Cup last Friday, hopes were high that Cork would lift the cup on Saturday.  And for a while it looked like a probability as Cork had the upper hand over finalists Kilkenny but in the end the Leinster champions prevailed.  Friday saw Cork put on a powerful display as Claire Coughlan Ryan, Rachel Thompson and Paula Walsh won their quarter final matches against Ballinasloe to send Cork through to the semi-final.  It meant that Michelle Tobin and Orla Murray were called in despite holding their own on their matches.  There was more of the same to follow in the afternoon as Cork continued their impressive form against Milltown in the All-Ireland Semi-Final.  Claire Coughlan Ryan had a tough match with Deirdre Walsh and it came down to the final hole but the past International and Curtis Cup player showed her class and secured a 1up victory.  Thompson won on the 17th and Cork only needed one more match.  That came from Paula Walsh, as she had a significant 5&3 victory over Ann Marie Dalton.  The final two matches were called in and Cork progressed to the All-Ireland Final.

The final between Cork and Kilkenny on Saturday morning was a very fluid affair, with the balance shifting on almost every hole.  Kilkenny had a slight edge around the turn but Cork reversed the trend and were up in three matches and all square in another to lead 3.5-1.5 early in the back nine.  The momentum shifted yet again though and this time Kilkenny didn’t let go.  By the time the result was called in Kilkenny’s favour, Rachel Thompson was the only Cork player to win.  That said, it didn’t reflect the close nature of all five matches.  Coughlan Ryan had a narrow loss to Mary Dowling, and Paula Walsh was trading the lead with Mary Leahy Browne for much of their match.  All in all, it was a great campaign for Cork.  They pulled out some key wins against Douglas and Killarney in the Munster semi-final and final, and they had two good wins in Greystones to reach the final.  Like the players, Cork’s team manager Pat O’Leary was disappointed with the loss but she was proud of the performance: “The girls were very disappointed but the club is so proud of their performance and what they have achieved.  The support from the Cork Golf Club members was amazing and the team really appreciated that”.  The Cork ILGU Senior Cup Team was: Claire Coughlan Ryan, Rachel Thompson, Paula Walsh, Michelle Tobin, Orla Murray, Miriam Abernethy and Deirdre Deasy.  Pat O’Leary was team manager and Nuala Lyden, assistant manager.