James Sugrue had another good start to a tournament when he shot a 5 under par round on the first day of the Southern African Amateur Strokeplay.  Although an opening birdie was followed by a bogey, Sugrue was back in the red on -3 at the turn. He added another three birdies on the second nine but a bogey on his final hole meant that he signed for 5 under to finish best of the Irish in fourth place. That score leaves him just one shot off the lead which is held by three golfers.

Rob Brazill was the next best of the Irish, finishing the top ten. He had a memorable ace on the par three 16th, but unfortunately for Rob he had a triple bogey 8 on the next hole.  Ronan Mullarney, Mark Power and Conor Purcell are END_OF_DOCUMENT_TOKEN_TO_BE_REPLACED

James Sugrue (Mallow) teeing off in the third round of the South of Ireland Championship at Lahinch. Picture: Niall O’Shea

James Sugrue lost his second round match in the South African Amateur Open this morning, losing out 4&2 to the top ranked home player.  Although he face a tough challenge, Sugrue had played well enough in the opening three days to fancy his chances against the home favourite.  Sugrue shot rounds of 68 and 73 over the weekend to finish in 15th place after the 36 hole qualifier.  He went on to record a 2&1 win over Aymeric Laussot from France, thanks to a nice birdie on his final hole.  Although faced with Nienaber who is 68th in the WAGR rankings, Sugrue would have fancied his chances.  The South African played to his WAGR position however and was six under through 11 holes.  Sugrue pulled a few shots back but when Nienaber birdied the 16th that was enough to close out a 4&2 win.

Ronan Mularney, Conor Purcell and Caolan Rafferty all made it through to the second round while Rob Brazill, Mark Power, Tiernan McLarnon and Alex Gleeson lost out in the round of 64.  Play continues today and all nine of the Irish squad will remain in SOuth Africa to compete in the SA Strokeplay which commences next week.  The travelling squad which includes John Carroll (Captain) and Neil Manchip (Coach) are combining both events into an extended winter coaching session.

ames Sugrue and Peter O’Keeffe were both named in the Irish team for the Home Internationals which take place in Wales in less than two weeks.  For the first time in well over a decade, Cork will be represented by two golfers in an Irish Mens team.  After missing out on selection for the European Team Championships in July, Sugrue finally gets his first senior international cap after coming close earlier this year.  The Mallow man earned several caps at boys level and after a three year gap, he’ll be back in Irish colours in Conwy, Wales.  Ireland won an unprecedented fourth title in a row last year, and this year they’ll be hoping to retain the title.

Both Sugrue and O’Keeffe have been on form END_OF_DOCUMENT_TOKEN_TO_BE_REPLACED

There was great news in Kinsale Golf Club earlier this week when John Murphy became the latest Corkman to earn full Irish honours.  He has been selected in the six-man Irish team to compete in the European Amateur Team Championship in Germany in two weeks’ time.  Murphy was almost a certain pick given his recent form.  He won the St Andrews Links Trophy earlier this month, and last week he reached the quarter-finals of The Amateur Championship in Royal Aberdeen.

The Louisville student represented Ireland at the Boys Home Internationals in 2016, and gaining a full international cap this year was definitely a target.   “Being named to the Irish senior team is very exciting” said Murphy after the announcement.  “I still remember going to Carton House for the champions dinner when I was young and seeing the Irish panels.  I was in awe of even being in the presence of players like END_OF_DOCUMENT_TOKEN_TO_BE_REPLACED 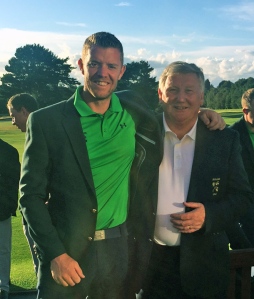 The 17th hole in the final match on the final day will be remembered for a very long time.  That was the hole where Ireland captured the Home Internationals for the fourth time on a row.  An hour earlier things didn’t look great, it looked like hosts England would win as Ireland were losing in six of the last eight matches on the course.  But the tide started to turn and Ireland pulled themselves back into hte match with a series of wins.  In the end it came down to Colm Campbell who was the last man left on the course.  Campbell overturned a five hole deficit (he was four down after five) to take the lead on the 17th, that guaranteed him a half and that in turn guaranteed Ireland a historic fourth title in a row.  Although Campbell lost the 18th and halved the match, that meant that the overall score was a draw with England.  As Ireland won a greater number of matches, they retained the title for the fourth year.  Just 0.5 of a point separated the sides with Ireland winning 26.5 matches against England’s 26.

While it was a great result for Ireland, Peter O’Keeffe was slightly disappointed, despite playing very well yesterday (and claiming two wins) he lost both of his matches today.  Still the very fine margin of victory means that the three points he contributed were invaluable in the final tally.  The Douglas member has more than justified his selection on the team, and this rounds off a great debut for him on the Irish team.

It was a great day too for John Carroll who was a selector on the team and was there in Moortown to witness the epic comeback.   The Bandon member has been a long time servant to Munster and Irish teams and will no doubt relish a great celebration this evening with Tony Goode, Neil Manchip and all of the Irish team. 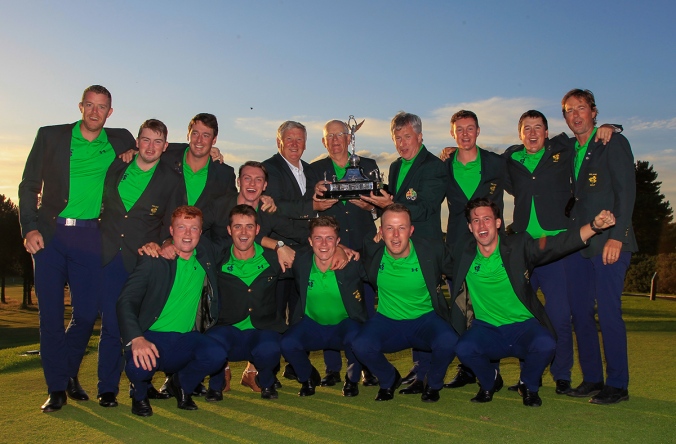 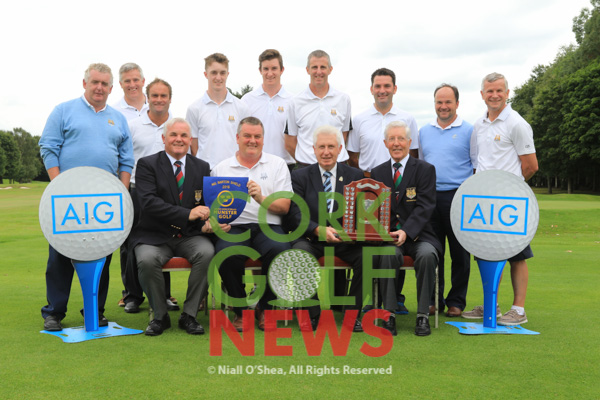 The Barton Shield is one of the most exciting amateur competitions on the calendar, the format is foursomes, and with just two pairs there is no room for passengers.  Muskerry dominated the competition for the past two years but this year Cork made a breakthrough.  They came through two weekends of matchplay golf, firstly to qualify from the 18 Cork clubs and secondly to get out of Munster.  Now they look forward to an All-Ireland semi-final in Carton House next month.  Cork started END_OF_DOCUMENT_TOKEN_TO_BE_REPLACED

Munster Captain Phil Cooney has named the Munster team to play in the Senior Interprovincials next week at Fota Island Golf Club.  Cooney, along with selectors John Carroll and Michael Coote waited until after the AIG Senior Cup qualifiers last weekend to finalise their team, who will take on the three provinces from 4th – 6th July.  Munster finished in second place last year in Rosapenna and five members of that team were again selected.  Gary O’Flaherty and Robin Dawson took two of the four automatic spots available through the Order of Merit, with John Hickey, Gary O’Flaherty and Geoff Linehan taking three of the four selectors places.  Newcomers on the team include Kinsale’s Cathal Butler and Castletroy’s Andrew McCormack.  Both McCormack and Butler has great starts to the season and both won counting events on the order of merit.  Peter O’Keeffe makes a return to the team after END_OF_DOCUMENT_TOKEN_TO_BE_REPLACED

After almost 40 years of membership, John Carroll won his first major in his home club yesterday when he won the Captain’s Prize.  The veteran won the Bandon Captain’s Prize which involved an 18 hole qualifier and a nine hole play-off.

Close to 300 Bandon members took part in John Collins Captain’s Prize.  John had a nett 70 after 18 holes, and that was enough to get the veteran into the 9 hole play-off.  He added +1 to his total in the nine hole play-off, and in doing so he scooped his first major at his home club.  He had won a number of scratch cups, and spent much of the past 30 years playing off scratch.  John focused on his golf game after retiring from soccer, and as well as playing in Bandon, he also represented Munster and Ireland.  Carroll, has been a great ambassador for Bandon Golf Club, he was capped as a senior international in 2000, and has spent well over a decade working with Bandon, Munster and Irish representative teams.  He was involved in two of Bandon’s all-Ireland wins, the Irish Mixed Foursomes in 2002 and the Irish Senior Cup in 2010.  He’s still actively involved as a Munster END_OF_DOCUMENT_TOKEN_TO_BE_REPLACED

The Munster Branch, Team Captain and Team Manager are delighted to announce their Munster Boys U14 Interprovincial Team END_OF_DOCUMENT_TOKEN_TO_BE_REPLACED