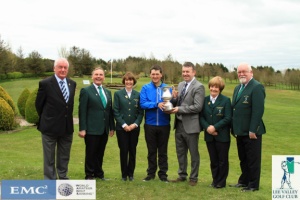 The final round of the Munster Youths took place at Monkstown on the 1st April with Mallow’s James Sugrue chasing his second title.  Torrential rain however forced the abandonment of the final round meaning that second round leader Jack McDonnell was declared winner.  James Sugrue continued his good form and won the Muskerry Senior Scratch Cup, the first of a four week swing of senior competitions.  Colm Campbell Jnr won the 54 hole EMC Lee Valley Senior Scratch Cup

the following week, Ian Spillane (Mallow) was the best placed local golfer after he finished in fourth place.  The Lee Valley SSC was now a WAGR counting event and the new sponsor combined with a top class field contributed to a great tournament.  Andrew McCormack from Castletroy won the Douglas Senior Scratch Cup, holding onto his first round lead to beat Jack Ryan and Peter O’Keeffe.  Kinsale’s John Murphy was named on the Irish team to play in the Fairhaven Trophy and the first round matches of the Fred Daly Trophy took place.  2015 Munster finalists Kinsale and Mallow made it through, as did Fota Island who would go all the way to the fourth round.

The final round of the Munster Strokeplay Championship took place in Cork GC on the first day of May.  For a while it looked like Cork might have its first winner of the Championship as Gary O’Flaherty led at the 54 hole point.  Kinsale’s Cathal Butler came charging through the field and at the end of the 72 holes, Butler and O’Flaherty tied for the lead.  The sudden death play-off started with both golfers parring the first and it was on to the tricky 17th then.  Both golfers hit the fairway but O’Flaherty found the sand with his approach.  Cathal two putted for par but Gary missed his par save and Bulter scooped his first Championship win.  A disappointed O’Flaherty went on to win the Castletroy Scratch Cup later on in May, one of two big wins for 2016.  Cork’s Tom Cleary was unable to defend his Munster Seniors title due to travel commitments, but he did win the Irish Seniors in Ardee.  The steady campaigner managed to hold on to a score in the final round when most around him dropped shots.  This was his first national seniors title and was yet another first for the prolific winner over several decades.  Lisselan and Fermoy were the winners in the Pierce Purcell qualifiers, while Rachel Thompson, Valerie Clancy and Mairead Martin all received call-ups to the Irish team to play in the European Girls Championships.

Denis O’Sullivan started his 18th year on the Seniors tour, and he was honoured by the European Tour to mark his 300th appearance at the Wales Senior Open.  O’Sullivan had a reduced number of starts in 2016 but the Cork member has retained all of his competitive instinct as he continued to extend his record number of starts on tour.  Karl Bornemann was third in the European Seniors Championships while Kenny McGarry won the Glengarriff Senior Scratch Cup.  John Hickey qualified to play in the British Amateur and Monkstown won through to the Munster finals in the AIG Senior Cup.  Popular Bandon member John Carroll won the Captain’s Prize, beating almost 300 other golfers and Mahon made it through in the Mixed beating Bandon in the area final.  Gary O’Flaherty continued his good form shooting a 64 in the opening round of the Irish Mid-Amateur Championship at Limerick.  He followed that with a 72 and a75 in a tough final round to win his second title by a single shot from Eddie McCormack.  Michael Quirke won the Leinster Seniors after leading from the opening round, with sparring partner Tom Cleary finishing in fifth place, and Fermoy won the AIG Junior Cup area final after a 19th hole win over Bandon.