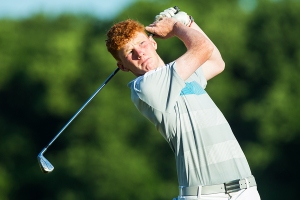 Kinsale’s John Murphy is heading back to Ireland tomorrow after two exciting events in France.  Just over a week ago he was playing in the French Amateur Open and although he dropped a few shot on the final day, that was still good enough to finish in a tie for 20th place.  Murphy had been as high as fifth in the competition before the final round.

After the French Open in Chantilly it was on to Thomas O’Driscoll’s Clement Ader Golf for his first professional competition on the Alps Tour. John was one of several Irish amateurs who were invited to play in the tournament by O’Driscoll.  Murphy was in the top ten after the first round and was the only Irish golfer to make the 36 hole cut.  Murphy added a second 76 in his final round and finished in 33rd place.  Murphy was three under through the first three holes on the final round, but a double on the fourth killed the momentum.  His four over par round saw him drop a few places in the final standings but the US bound golfer was happy to get the experience of a ranking professional golf tournament.  “Overall it was a great experience” said Murphy, “it was good to compare my game to touring professionals.  I wasn’t as nervous as I would be in big amateur competitions.”

Murphy travels back to Ireland this weekend and will be teeing it up for the first time at the East of Ireland Championships which starts in Baltray on Thursday.  It’ll mark the start of a busy summer season for Murphy: “Next up I have the East, then Tralee and then the Leinster Students so I’m looking forward to this run of events.  Hopefully I can pick up a win at one of these because I have given myself plenty chances but haven’t capitalised.  Also I’m looking forward to the Pro-Shop Challenge in Kinsale in July. Hopefully we can get a good crowd out, raise some money for our charity partner, and enjoy it as much as last year.