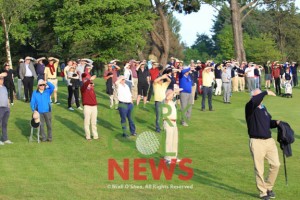 20 minutes can be a long time in golf, and that happened this evening as East Cork turned the tide to snatch a 3-2 win over Bandon in the AIG Jimmy Bruen Shield area final.  Douglas was the venue for the South Munster final and a crowd exceeding 300 followed to five matches as they wandered through the course on a wonderful evening for golf.  Bandon laid claim to the first two matches and put themselves in a strong position.  Michael O’Dell and Ger Cummins won on the 17th while David Long and Charlie Long won 4&3.  It looked like the third match would be the decider, East Cork’s Barry O’Brien and Tom Lynch were one up after winning the 17th but an error off the tee on the 18th meant that Bandon’s Ryan Miller and Mike Ryan were able to win the 18th with a par and bring the match to the 19th. 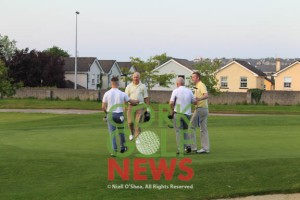 As the fourth match reached the 18th green East Cork’s Noel O’Mahony and Rory Hurley parred to win the match at the expense of David McLoughlin and Denis McCann.  At the same time the fifth match was won by East Cork as well,  Aidan Goldspring and Henry O’Brien winning on the 17th.  That left the score at 2-2 meaning everyone on the 18th moved quickly to the 1st green where the 3rd match would be decided.  This time it was Bandon who found trouble off the tee.  East Cork took full advantage, and they had two putts from 12 feet to win.  Tom Lynch’s putt finished four inches from the hole and the match was conceded.

It was a dramatic way to win, claiming the three matches on the 17th, 18th and 19th holes.  East Cork can now look forward to a Munster final in Killarney in July, with just two more matches between them and a Munster pennant.