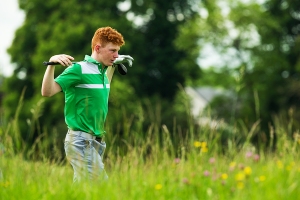 Peter O’Keeffe was a late withdrawal this afternoon from the East of Ireland Championship which gets underway in Co Louth Golf Club tomorrow.  O’Keeffe was one the highest ranked qualifiers but a neck injury has prevented him from taking part.  He struggled with the problem last week during the Douglas Senior Scratch Cup and with no improvement he made the tough call to withdraw late this afternoon.  Although the Irish Open champion is missing, there’s still a strong challenge from Cork.

Munster Students Champion John Murphy (Kinsale) returned from France earlier this week and he’ll be confident from a run of recent good form while fellow Kinsale member Cathal Butler will be looking to return to the form he displayed at the Munster Students in March.  Both Sean Desmond (Monkstown) and Gary Ward (Kinsale) are coming off wins last weekend.  Desmond won in Douglas while Ward won in Cobh and both will be hoping the run of good form continues.  James Sugrue (Mallow) also won recently in Castletroy will also be hoping to add to his haul.  Cork duo John Hickey and Gary O’Flaherty will also be hoping for a good performance in Baltray  Hickey has won already this year in Muskerry and O’Flaherty will be looking to play well and challenge on the leaderboard.  Castlemartyr’s Mark Shanahan has had a low profile so far this season and he’ll be looking to kick start his season.  Dublin based Ian O’Rourke is also in the field, he finished in the top ten last year and has been playing to a high standard so far this season.

Kevin LeBlanc from The Island is the lowest on +4.1 but this could be his last championship as he’s indicated that he’ll be turning professional in the coming months.  The cut for the championship fell at +0.2, with 132 golfers qualifying for the first three rounds of the 72 hole event.  The top 45 golfers will qualify for Monday’s final round.