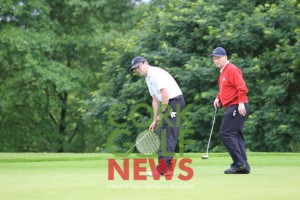 Mahon won the South Munster area final last night in very competitive and sporting game in Lee Valley.  Mahon and Macroom were the last two teams standing after winning three matches each at their respective venue qualifiers.  Despite the heavy rain, the course in Lee Valley was in great condition and the course provided a solid test for all of the golfers.  Mahon as usual had a huge number of supporters while Macroom members were also well represented.  Both clubs seemed evenly matched overall and after the front nine it was very close.

Mahon secured the first point on the 13th green when Declan Power and Michael Sexton beat Ed Neville and John Donvovan.  Macroom balanced the scorecard soon after with another early win.  Martin Kavanagh and William Buttimer beat Norman McCarthy and Anthony Madden 5&4.  At that stage the advantage was definitely with the West Cork qualifiers,  they were two up in match one and three up the back match which looked like being their winning point.  Mahon’s first pairing of Kieran White and Tom Hickey had other ideas though.  They overturned the two hole deficit and won the 15th, 16th and 17th to go one up heading onto the 18th tee.  Macroom got into a bit of trouble with their approach, Mahon took advantage to win the 18th and recorded a 2 up win to take a 2-1 lead overall.  It was a great result for the Mahon pair, they had been three down at the turn, and they won the closing four holes to win.

There was a huge crowd around the 18th and they now made they way back to the 15th green to watch the final two matches.  Mahon were three up playing the 15th in match four, while Macroom were three up in the back match.  Macroom’s Tim O’Callaghan and Cathal Forbes won the 15th to peg back the lead to two holes and the pair were very unlucky not to birdie the tough 16th after a 30ft putt across the green shaved the hole.  Mahon also saved par thank’s to a plucky 8ft uphill putt which rattled the back of the cup.  Mahon’s Noel Fitton and WIllie Hegarty took their two hole lead onto the 17th and after both pairs found the fairway off the tee, they both hit the green in regulation.  News reached the 17th at this stage that match five had finished on the 16th green with James Neville and Vince Twomey signing off on a 3&2 win for Macroom.  As the last of the spectators from the 16th made it up to the 17th, both Macroom and Mahon missed their long approach putts.  Macroom’s par putt was conceded but Fitton and Hegarty claimed their winning point when the three foot par putt dropped.  Mahon now advance to the AIG Pierce Purcell Shield Munster Finals which take place in Killarney in July.

The newly built tee on the 16th

The hard work and investment in Lee Valley was clear to see yesterday, despite a large amount of rain  Golfers have come to expect great greens in Lee Valley but the firmness of the fairways was commented on by both players and spectators as they made their way through the course.  The wet and sticky rough did penalise golfers for any shots that drifted into the first cut.  Work continues on the new tee box complex on the 16th hole, the growing-in is advancing and the landscaping around the new raised tee is ow taking place.