There was no joy for Cork clubs in Tralee on Saturday as both Cork and Mallow exited at the semi-final stage of the Munster finals.  Mallow were in action in the AIG Senior Cup and for a while it looked like they would beat Limerick in their semi-final.  Paul McCarthy and James Sugrue led from the front and both recorded impressive wins, McCarthy won 3&2 while Sugrue won on the 14th.  Conor Dowling lost match, as did Brian Attridge meaning the result would be decided by Adam Boland’s match with Limerick’s Justin Kehoe.  They were all square on the 15th but Kehoe won the 16th to go one up.  Boland made a huge six foot putt on the 17th to avoid losing and a great birdie on the 18th meant that the match went on to the 19th.  Both players found the fairway on the additional hole and the advantage swung Limerick’s way when Boland’s approach failed to stop on the green, leaving him with a very tricky chip from the light rough behind the green.  Unfortunately for Boland he couldn’t get up and down and Kehoe won for Limerick. 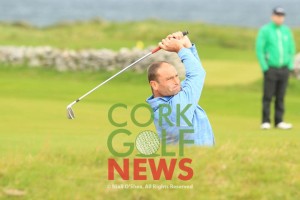 The tide was against Cork for most of their match with hosts Tralee in the AIG Barton Shield.   John Hickey and Ian O’Flynn had their hands full in the first match as Tralee’s Darren O’Sullivan and Eoghan O’Donnell went two up through five holes.  They were two down at the turn despite the Tralee pair playing some excellent golf, but Tralee’s lead extended to three at the 13th.  In the back match Mark Ford and Gary O’Flaherty were also two down by the 5th but they managed to level the match with birdies on the 6th and 7th and the match remained level until Tralee won the 10th and the 12th.  In the front match Tralee extended their lead and Cork found themselves three down on the 13th and with Cork running out of holes it was Tralee’s to lose.  Ford and O’Flaherty rallied to win the 13th and the 14th and on the 16th they went one up on Tralee.  But Cork ran out of holes and Tralee’s first pair went on to inflict punishment on Hickey and O’Flynn, the match finished when Tralee won the 17th to finish four holes up on Cork.

The Barrow course in Tralee was in superb condition for the finals, the weather was great too and apart from one heavy shower in the morning, the sun shone all day.  Further works are ongoing in Tralee, a new six hole par three course is being developed.  Hawtree Design are managing the ambitious project and with seeding due in the next week or two the new facility is scheduled to open in June.

It’s been a disappointing year for Cork clubs on the cups and shields front.  At this stage Muskerry are the only Cork club to hold a 2017 pennant.  Bantry Bay will be hoping to join them today as they play in the AIG Junior Cup in Tralee