Although it’s normally busy spot, Castlemartyr will be fully booked this weekend for their annual scratch cup weekend.  With over 300 golfers already booked in for the three days, this weekend  promises to be as busy as the previous August Bank Holidays for Castlemartyr.  At a time when members competitions might be quieter, Castlemartyr started their scratch cup weekend eight years ago and it has gone on to become a central part of the calendar for many golfers.  There are three competitions in all, Junior (4-11), Intermediate (12-18) and Minor (19+) and all run over the three days.  The event is again sponsored by McCarthy Insurance Group and the entry fee is €35 per person.  It has been a busy year for the golf side of Castlemartyr.  Membership has again grown and they now have over 400 golfers in the three categories of membership.    The mens club saw a big increase at the start of 2017 and they have continued to see the overall number increase as more men joining every month.  The Ladies club too continues to grow after its formation in 2016, and with a push behind the junior golfers last year that completed the three categories that should see the club kick on to further growth.  As the golf club membership market shows signs of recovery, Castlemartyr’s Director of Golf Breffne McKenna is very positive about the club.  “Interest in membership at Castlemartyr has never been better and we have in excess of 400 members now with the Ladies club numbers growing every year” said Breffne.  “We are open for membership and have added in new categories this year – Intermediates 18-24 and 25-30, 5 day gents membership and spouse membership. Re subs – Seniors (+60) rate is €900 per annum, the 7 day gents option is €1,200 per annum, Intermediate ranges from €450 – €650 and Ladies are €699.  The Ladies Club is growing and we are offering membership at €699 and no joining fee.  We also have a fine group of juveniles and are growing this club with fees of only €150.”  While the membership aspect of the resort is critical, the course remains a popular destination for green fees and societies, as well as large demand from the hotel guests.  Maintaining the course to the exacting five star standard is a key priority for the course staff.  Paudie O’Sullivan and his greenkeeping team have been working hard to water the greens and fairways and keep the course from burning in the hot dry weather.  The hard work has paid off in a time of a severe lack of rain, and Breffne explained what has been involved in maintaining the course.  “The greens have never been better of all the feedback from visitors and members alike.  We have used water from our own wells and we have watered the course using tankers for the past few weeks day and night.  The pressure on the green keeping team was enormous as they needed to water day and night to keep up.  The weather has never been like this so it was a new learning curve for us all.  Paudie O’Sullivan must be commended though for his work over past few weeks as the course hasn’t burnt up.” 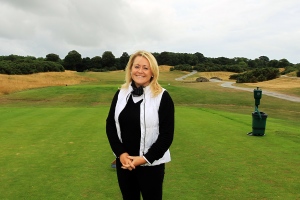 The Ron Kirby designed course has is now eleven years old and the original design concept of an “inland links” remains true.  Fast running sand based fairways, fescue run offs and receptive greens have been the hall mark of the course and with the hard work of the green keeping team very few changes have been made to the original vision.  Work was completed this year on several bunkers and there are further improvements planned in the near future.  While Breffne won’t go into details, it looks like the long awaited driving range is definitely on the radar for 2019.  This is form just one part of a series of improvements in the resort.  An extension to Knights Bar will be the first step and then a major expansion of Francini’s Italian restaurant is likely to take place.  “With the new owners on board we are always looking for ways to enhance the course, clubhouse, golf facilities and the golfers experience.  There are loads of ideas being discussed at the moment.”

Castlemartyr hosted its first cups and shields weekend this year, it hosted the South Munster qualifier for the Irish Mixed Foursomes in June with ten clubs playing off over two days.  Although the resort manages some of the largest golf classics, corporate days and society outings, it was the first time that the GUI and ILGU were staging a provincial event.  It was a great success the club and resort worked closely to ensure that the normal headaches of parking, practice and catering were carefully managed.  Outside of big event this weekend, there are plenty of opportunities to play in the east Cork resort.  The Wednesday Whites continues to be a very popular and at €25 per person it’s great value.  Golfers also have the option of joining the weekly BBQ which is held in the Pod every Wednesday.  The Senior Scratch Cup is scheduled for Sunday 2nd September and this year it’s in conjunction with Top Golfer Tour.  There a large crowd on the course tomorrow for the ladies open threeball scramble, and there’s a ladies two ball rumble taking place on the 6th September.  Bookings for all competitions and green fees can be made by contacting the Pro Shop at Castlemartyr Resort.

It’s been an interesting decade for everyone involved in Castlemartyr.  Designed at the height of the building boom, the resort was initially designed as one of three sever star destination locations in Ireland.  As the financial environment changed so too did the operating model for almost all hotels across the country.  The golf course however was insulated from much of the change as the ground works had been completed in 2007.  The Ron Kirby designed course was opened for play in 2007 and was set out under Kirby’s vision as an inland links course.  Although the sever-star model may have changed, the quality of the course in terms of design and maintenance was never questioned.  Long running fairways, strategic bunkering, and lightning fast shallow greens are the signatures of the Kirby links.  Kirby’s other projects in Ireland include Mount Julliet, Dromoland and he’s still has an active involvement in the Old Head which he co-designed with Liam Higgins.  From the outset Castlemartyr earned a reputation as a course for all levels, and attracted casual golfers and category one club golfers alike.  In 2016 the hotel and golf course were sold to the Hampshire based Shaw family who own and operate several other golf resorts across the United Kingdom.  That change brought about a substantial investment in machinery which paid an immediate dividend on the course.  The front nine was always deemed to be the easier of the two nines, although it does have several challenging holes.  The par five fourth hole is an example,  there’s out of bounds on the left and right off the tee and there’s a hazard running across the fairway at around 350 yards. The ninth is the classic short par four, and the green would be within reach of many golfers were it not for the dry stone burn that runs in front of the green.  That dry burn meanders through the front nine affecting several holes and while many golfers think it should have water running through it, the original design was always for a dry burn.  The back nine has several challenging holes, the 10th is a low index hole, a long par four that turns twice before reaching a tough green.  The 11th is a tough par five, a long drive is needed to find the fairway and after that you’re left with a decision as you look down towards a hidden green.  The blind approach makes the hole a real challenge.  From the 12th there’s a good mixture of golf holes, but rest assured that playing to your handicap on the back nine will need good golf.  Whatever your level of golf, you can be assured of two things in Castlemartyr.  The course is suitable for all levels, and that you’ll always find it in great condition.