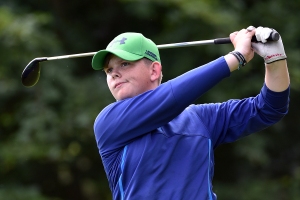 Zak Collins and Eoghan Cassidy have been named on the Irish squads to play in the Reid Trophy (Under 14 English Championship) in Reading next week.  Collins from Douglas and Cassidy from Kinsale have been playing well all season and both golfers featured on the successful Munster team who won the Under 14 interprovincial championship last week.  The event is a great opportunity for the cork duo, it attracts a top quality field of English and international players whose playing handicap is 7.4 or better.  The 54-hole stroke play championship is played over three days.  The full field plays 18 holes on each of the first two days with the leading 70 competitors going on to play the final 18 holes on the third day.  The Cork pair will be joined by two Limerick golfers, Ballyneety’s Morgan O’Sullivan and Iestyn Winn in a strong Munster line-up.  Faithlegg’s Alex King has been selected on the GUI squad to play in the Scottish U14 Championship which takes place the following week.

Sara Byrne was selected as one of the three Irish golfers for the World Junior Golf Championships which takes place in Ottawa in September.  The event, which is by invite only, will pit twenty International Teams against one another at Camleot Golf & Country Club from September 9th to 14th.  The Douglas golfer is back on form, reaching the final of the Leinster Women’s Championship in Newlands last weekend.  She also won the Irish Women’s Close title in June.  Byrne will be joined by Annabel Wilson and Lauren Walsh in a strong Irish line-up.  The ILGU also named their three golfers for the Espirito Santo Trophy.  Paula Grant, Olivia Mehaffey and Annabel Wilson will be hoping to match or improve on the 2016 result when Ireland secured the bronze medal. Carton House hotel and golf resort in Co Kildare will stage the Championships from 26 August-9 September while the town of Maynooth will be transformed into a golfing hub for two weeks with 10,000 spectators plus 1,000 players and officials attending.  The GUI will announce their team week after the conclusion of the AIG Close Championship.  Robin Dawson is almost assured of selection as the leading Irish golfer on the WAGR rankings.  Cork hopes are high that Kinsale’s John Murphy will claim one of the two remaining places on the team.