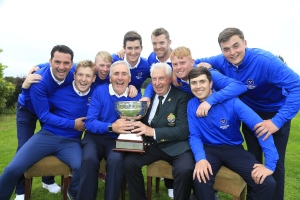 There was a dramatic finish to the Interprovincial Championship this afternoon, with Geoff Lenehan again sealing a win for Munster.  The Waterville member won the crucial point in 2012 and 2014, and he was at the centre of the action again in Athenry, winning his singles match to give Munster the win against Leinster and the title.

Munster went into day three with a narrow lead, all four teams had one win each, with Munster ranked first on the basis of matches won.  The meant that a win for Munster should have been enough to seal the title.  The foursomes didn’t quite go to plan, with Munster trailing 3-1 at lunchtime.  The only win came from O’Keeffe and Lenehan.  Munster came out firing in the singles though, with Peter O’Keeffe and James Sugrue claiming the first points.  Munster needed five of the seven points to claim the title and with two in the bag the odds favoured the men in blue.  Eanna Griffin brought in a third point and while Andrew McCormack lost, John Hickey won to make it 4-1 with two matches on the course.  Both playing the final hole, Geoff Lenehan was one up and Gary O’Flaherty was one down.  Lenehan halved his final hole with Alan Fahy, winning his match and sealing the win for Munster.

“That was unbelievable ,” said Munster captain Michael Coote speaking to Golfnet after the win. “We knew this morning after being down 3-1, we had a great team meeting before we went out.  I told them, ‘Lads we did 6-1 yesterday in the singles.  I only want 5-2 today.’ And they pulled it off. What a team.”

It was a great week for Captain Coote, and selectors John McHenry and George Mellerick.  The new management team were working with a solid group of experienced players and it showed when all eight golfers contributed to the team total 18 wins and three halves.  Although Munster tied with Ulster on two wins each, Munster won due to their better win ratio in individual matches.