The presentation of the Harbour Shield took place in Mahon Golf Course recently and members from the clubs who took part over the summer returned to play in the final competition of the year.  Mahon won the final a few weeks ago in a thrilling match against East Cork in Monkstown.  The Mahon team was comprised of Sean Foley, Eoghan O’Shea, James Daly, Stephen Jermyn, Aidan Power, Jack Bolster, Simon Lougheed, Liam Foley, Cathal Browne and Cormac Beausang.  This was Mahon’s second time to win the competition, having won the inaugural event in 2009. 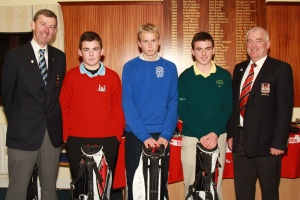 The competition has grown from the initial five clubs taking part, and there are now three inter-club junior golf competitions available to Cork clubs.  Almost 40 golfers turned up for the annual presentation competition where the participants from the ten clubs were put into mixed teams and played in a betterball competition.  While the golf was competitive and some attractive prizes were on offer for the top teams, no one went home empty handed.  The winners on the day were Conor Twomey, Colm Bermingham, Michael Cosgrove and Jack Taylor.  Second place went to Paul Barry, Eoghan Mathers and Patrick Kennedy.  The organisers are hoping to expand the competition again next year and are looking for more clubs to join the league which see’s young golfers from 13 years to 16 years play competitive inter-club golf for the first time.

Niall Turner failed to advance to European Tour final qualifying over the weekend as he missed out on a top 17 finish in Alicante.  Turner was in action in Las Colinas last week but his final score -2 was five shots off the qualifying mark.  Turner opened on Friday with a two over par 73 but bounced back with a 67 on Saturday.  Two final rounds of 70 and 72 meant Turner couldn’t improve and his quest for a European Tour card is over for this year.  The Muskerry member and former international is likely to head back to the Asian Tour next season.  Turner played on the Asian Development Tour, the equivalent of the European Challenge Tour, for much of the season.  He recorded his first win as a professional in July and went on to six further top ten finishes, including a second place and a fourth place in his last two outings.  The good run of form saw Turner rise in the rankings and he is now third in the order of merit, with over €35,000 in earnings.  The top five will earn a full card on the main Asian Tour for next year.  With only one event left this season, Turner is almost assured of his card next season.  Clubs are reminded that the Annual Delegates Meeting of the Munster Branch takes place on Tuesday 25th November at the Hibernian Hotel in Mallow.  Clubs will have received all details relating to the meeting including the number of delegates permitted.  A ballot for the provincial council seems likely as 19 people have been nominated for 17 council positions.  The meeting gets underway at 6pm sharp.