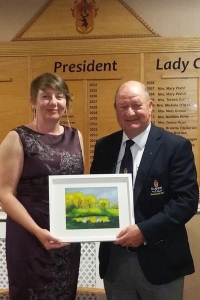 Blarney President Paul O’Neill held President’s Prize dinner last week and it marked the latest major event in a busy year for Blarney.  The resort hosted the Munster Boys Under 16 and the Boys Interpro’s in a busy season that included several other local events.  The Interpro’s were the big-ticket event, putting the resort on the map nationally and President Paul was delighted with the outcome.  “We hosted very many classics and societies in the past however the Muster Boys proved to us that we had the capability to host a major event, and the Boys Interprovincials is one of the GUI flagship events.”  Hosting a major event is a big undertaking.  As well as taking over the course for up to a week, the GUI also depend on a substantial amount of support from local volunteers.  Blarney members were not found wanting as Paul explained.  “We sent up a flare for our members to act as stewards, fore caddies and helpers, and to be fair we were amazed at the response.  We easily covered each area that may have caused concern for young golfers who were not overly familiar with the course.  But, these are among the best in the country so our main task became ball spotting and according to the team’s managements and players we did an exceptional job.  That point has been reinforced by the GUI representatives.  This is a young club (just 11 years in existence) and to successfully pull off an event like this proves that we can be considered capable for any such event in the future. The work carried out by the greenkeepers leading up to and during the events was above and beyond.  They are a dedicated team and were not found wanting when called upon. The praise heaped upon the course & our facilities is a cause of great pride to the club. The members under the great leadership of the Pro – Alan O’Meara – did the club proud to put it very mildly.”

Paul’s President’s prizes took place over the last two weekends and that was a special event for the President who has been playing golf for over 40 years.  The mens competition saw a change this year, with the competition being held on one day.  “Having run the golf over two days for many years, some were saying that the weather occasionally suited one group over another so we decided in a one day event” explained Paul.  “It was much more concentrated having all the golfers there in the one day and I think it helped to create a better atmosphere as well.  That of course makes the job of a competition secretary much harder to close off a competition (timewise) so holding the dinner and presentation the following week made more sense.  It also gave the winners a week longer in which to bask in the glory of victory!”  A week later everyone gathered in the John Daly Suite and this also included the winners of the Presidents Prize to Ladies and Juniors.  As usual, social events in Blarney are big nights and this was one to remember for Paul.  “It was an amazing night, the food was brilliant, the music was excellent and the singsong was something to behold.  The banter and craic throughout the whole event was special.  It was an incredible experience for myself and my family.  Jim Long was one of my guests, he had driven to Castlebar that morning & was back in time for the meal – that was some effort.”  There was a charity element to this year’s President’s Prize in Blarney, the members raised a substantial amount for a local good cause.  “My chosen charity for my event was Irish Guide Dogs for the Blind” said the President.  “I believe a national charity based in Cork is particularly worthy of support.  On both the gents and ladies days we sold raffle tickets and had a bucket collection in our Pro Shop & the Pro – Alan O’Meara collected on my behalf.  We raised in the region of €1,500 for the charity and we were delighted when the CEO Padraig Mallon expressed his gratitude on behalf of those we supported and said they were very grateful for our generosity.” 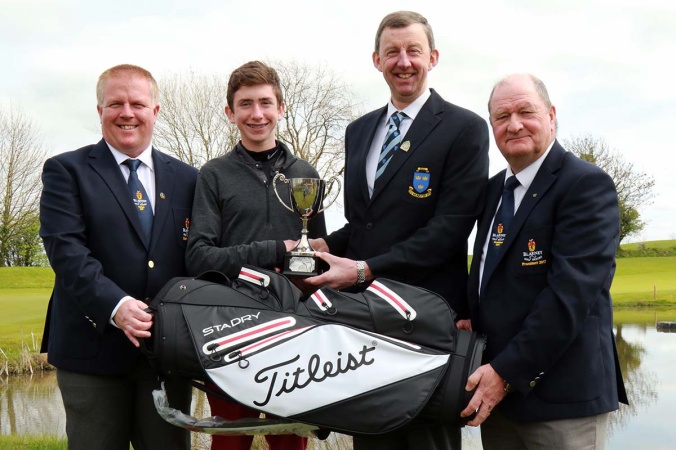 Tom McKibbin, winner of the Munster Boys Under 16 at Blarney earlier this year.
Picture: Niall O’Shea

It has been an interesting journey for Blarney.  Built at the peak of the construction boom the 6,712 yard championship golf course was designed by flamboyant US PGA tour star john Daly and Daly visited on several occasions including the official opening in 2006.   Despite boasting a busy course and hotel the resort ran into trouble within a few years.  Like many other leisure developments of that time, a receiver was appointed by the banks and the property was put on the market.  An initial valuation of over €10m failed to attract a buyer and it remained on the market.  The members rallied at that point, and developed a plan to ensure that the golf side of the operation kept going.  New membership packages were launched and monthly payment options for annual subscriptions proved very popular.  The resort packaged access to the leisure club and hotel with golf membership, again proving popular with members.  With a constant focus on driving member value, the club maintained and grew its membership.  Northern Ireland Businessman Tom O’Gorman bought the property in early 2014, safeguarding the future of the resort which had been on the market for 7 years.  The club still has several membership options and is open for ladies and gents.  Green fees are available daily and there’s also an open singles competition every Thursday for any golfers looking to play the John Daly inspired course.