The Amateurs reclaimed the bragging rights in the Pro Shop Challenge last week, as Cathal Butler and John Murphy beat Ger Broderick and Ian Stafford in Kinsale.  It was the third staging of the unique event and while the amateurs won on the course the real winner was the charity partners.  Over €4,000 was raised for Marymount and the RNLI.  Organiser Ian Stafford  was delighted with the results of their fundraising event.  “We’re absolutely delighted with the amount of money that we have raised to date which is in the region of €4,500” said Stafford.  “To surpass our target of €3,600 by nearly €1,000 is phenomenal and much of this is down to the hard work of our captain Brian Doran who has been a huge help in securing sponsorship to the event.  This year we had local businesses sponsoring each hole as well of a number of sponsored challenges throughout the round.  To think when we first discussed this event three years ago that we would have raised nearly €11,000 from the first 3 events is hard to believe and we are absolutely delighted with the support we have got.” 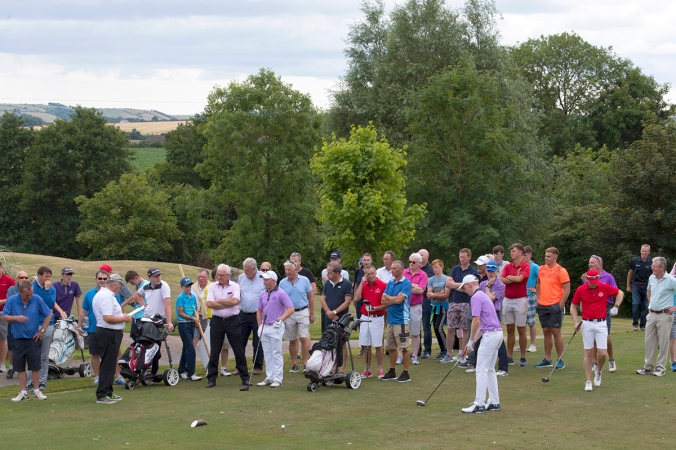 Cathal Butler was delighted to win back the title they lost last year, although they may have had some assistance from the greenkeepers.  “Padraig Crowley and his greenkeeping staff had the greens in gorgeous condition, smooth and fast” explained Butler.  “They even cut the pins in the positions we wanted, and we are very thankful to them for that.  Despite a bogey start for myself and Murph we settled down early with birdies on 3 and 4, and after birdies on 8,9 and 10 there was no looking back.    Our driving was very good and the old guys couldn’t keep up! We hit driver everywhere and although it caused us bogies on the 1st and 13th, we were rewarded with short pitches to the green on 10 and 14.  Entertainment golf is how our juvenile officer, Ger Cullinane described it.  Murph had the hot putter this year and he holed bombs on the third, sixth and a fantastic birdie putt on eight after being in the woods in two.  It was a great day for golf, the atmosphere was very pleasant and I think a great day was had by all.  It was a great opportunity for the members to see some birdies in a nice relaxed atmosphere.”  In the end the amateurs won by five strokes, their -7 beating the -2 from the professionals.  With many donations dependent on the number of birdies, the combined total of 23 meant it was a good day for the charities. 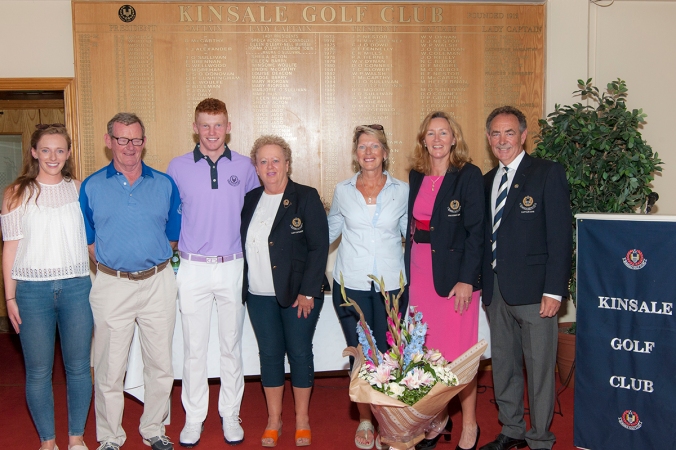 It’s been a busy few weeks for John Murphy, the Louisville student won an international event in St Andrews. He was selected on the Irish team for the European championships and then he was named on the GB&I team to play in the St Andrew’s Trophy.  Despite being busy he made sure he was back in Kinsale for the important event.  After the challenge John was honoured by the club for his recent achievements, including his first full international cap.  “It’s an event I really do look forward to, but for different reasons” said John.  “It’s nice to come back from constant competitive golf and really just enjoy the day.  It’s a really satisfying day because it’s for a great cause and I love the atmosphere that this event creates.  The support which the event gets is incredible and it’s growing every year.”  John was delighted too with the reception on Friday night.  “Friday evening was amazing, it was an honour to receive honorary life membership and it’s an evening I’ll cherish forever.  The club has been so supportive to me and it’s a pleasure to play for a club full of such amazing members.  I am proud to be from Kinsale and I look forward to further representing the club in future years.”  It was the start of a great weekend for Kinsale, they went on to win their first Cups and Shields pennant in Dundrum on Sunday and Club Captain Brian Doran was delighted with Kinsale’s year so far.  “There is a great buzz in the club at the moment with the successes our teams are having along with John’s individual successes and this was very much the case with over 200 members and visitors enjoying the golf and banter on Friday.  John and Cathal were deserved winners playing some fantastic golf, it was great to see John put in a good performance on the day he was made an honorary member of the club.”  The last word went to Ian Stafford who already has plans in place for the next running of the popular and successful annual event.  “This year we had a record no of birdies made (23), record crowds and also record funds raised, records we will be keen to break in the Pro Shop Challenge 4 on Friday July 21st 2019.”

Sunday’s historic win was part of a stunning weekend, beginning with the PSC on Friday. We had the largest crowds ever on the course and while the count is not in yet, we are confident we will break the €10,000 target. The golf from all four was outstanding, helped by the course being is such terrific condition.

The presentation to John was a great success, it was so good that the clubhouse packed to see John Murphy receive his Honorary Life Membership, celebrating his Irish cap. John spoke very eloquently and praised the junior set-up that is bearing fruit so prolifically now. A portrait of John standing on the Swlican Bridge with the St Andrews Links Trophy was unveiled, with his club crest proudly on show.