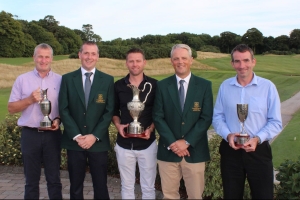 Castlemartyr is generally a busy golf course, but over the August weekend that goes to a new level as the club hosts their annual scratch cup weekend.  It’s now a regular event on the Cork golfing calendar, having started seven years ago.  This year was no different, well apart from setting a new record of 428 entrants over the three days.  And while there can only be one winner of each of the three events, there were well over a dozen prize winners from the weekend.  The generous prize fund exceeded €2,000.  The three day event is a big undertaking for the club, and once again they came up trumps.  “The weekend was a great success, we had a record number of entrants” said Donal Golden, Captain of Castlemartyr.  “The weather was kind to us, with three days of ideal golfing conditions dry, warm and little or no wind.  Typically the Sunday afternoon of the Scratch Cups weekends is a little quieter, however that wasn’t the case this year, with all three days extremely busy.  The preparation and running of the competition took a big effort on behalf of the Club and the Golf Operations at Castlemartyr, but was well worth it with everyone having a very enjoyable weekend.”

Getting over 400 golfers out over three days is no small task, and that’s underlined when you consider it’s a pretty important competition.  Donal outlined what’s involved for the club committee and members in running the competition.  “From securing sponsorship, advertising, purchasing the prizes (this years prize value was in excess of €2,000), signing in of guests, starting players on the first tee and marshalling on the course for pace of play” explained the Captain, “not to mention the checking of cards, publishing of results and hosting of the prize night, as you can imagine it requires a lot of effort.  We gratefully received many willing volunteers from within the Club and committee.  We also have a fantastic relationship with Breffne McKenna (Director of Golf), Alan Gleason (PGA Golf Professional), Paudie O’Sullivan (Course superintendent) and Martin Barnwell (Manager of the POD Clubhouse) which helps in so many ways.” 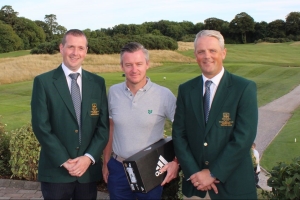 This year marked the sixth year that McCarthy Insurance Group sponsored the weekend.  The Cork based insurer has continued to support a large number of sports and clubs across the county and Donal was quick to acknowledge their continued support for the event.  “Of course, without our valued sponsor the prize pot couldn’t be as lucrative and enticing to the entrants.  Also, to be associated with such a great Cork brand as McCarthy Insurance Group brings a lot of prestige to the competitions.  I would like to add a huge thanks to all our club sponsors, who support the club in running competitions every weekend throughout the year.”  Castlemartyr jumped to  a new level in late 2016 when they had a large increase membership.  That number has continued to grow, albeit at a slower rate through 2017 and 2018, and that’s added to the stature of the club. 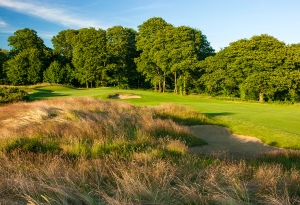 It’s been a tough year for golf courses.  There’s no substitute for rain and no amount of irrigation can make up for a lack of rain.  Most golfers will have seen pictures of light green and yellow golf courses during the dry spell, but the team in Castlemartyr managed to keep their course green and ensure that playing conditions were a good as possible.  Bringing over 400 golfers to the event will inevitably lead to wide variance of opinions on the condition of the course.  But that wasn’t the case as Golden explained: “The feedback from the players on the condition of the course was unanimously positive. The greens have been running between 10 and 11 on the stimp meter all year, with the August Scratch Cup weekend being no exception.  A huge congratulations and thanks must go to Paudie O’Sullivan and his team for their tireless work on the course.  The competitions were played on the longer blue course at Castlemartyr LGC, with a combination of different pin positions to both allow all entrants have an enjoyable round whilst challenging the front runners.”

Given the recent weather, the poor start to the year has been forgotten by many.  But despite the slow start, golf in Castlemartyr ramped up pretty quickly in what turned out to be a very busy summer for the Captain and his committee.  “Like most clubs the year began slowly with the record rainfall and snow leading to a lot of disruption, but once April came it has been like a whirlwind. From hosting the inaugural Irish Boys and South Munster Mixed Foursomes in June, our Club teams competing on all fronts throughout the Summer, with notable wins for the Jimmy Bruen and Pierce Purcell teams, to hosting our largest members Presidents Prize, Family BBQ, the Junior, Intermediate and Minor Scratch Cups through July and August.”  And the action hasn’t stopped just yet, although it’s mid-August there’s still plenty of events to get through before the end of the year.  “We will host our Senior Scratch Cup on Sunday the 2nd September, in association with Top Golfer” said Donal.  “Then I will host my Captain’s Prize and Dinner on the weekend of the 14th and 15th September.  Following these big occasions we will start preparations for our Winter League, Christmas Hamper and Christmas Social night, as well as our AGM in early December.  So no rest for a couple of months yet!”