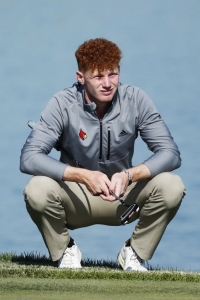 “That was a grind” – that was the first reaction from a smiling John Murphy after finishing his final round at the NCAA Regionals in Louisville.  But it was a very positive finish as two birdies on 16 and 17, and a long par putt on 18 from Murphy proved to be crucial as his University of Louisville side qualified for the NCAA National Championships earlier this evening.  Murphy finished the 54 hole tournament tied for 12th place on -2, and his finish ensured that the Cardinals finished in the top five and now go though to the final stage of the college season.  Overnight the Cardinals were in fifth place, with a six shot cushion over their nearest challenger.  At the turn though it was a different story with the Louisville holding the last qualifying spot by just one shot.  Murphy was level par for his first nine but dropped three shots in the next five holes.  At that stage it was getting tight, but the third year student was two under for his final four holes which helped the Cardinals go through to the nationals for just the fourth time in their history.  In the end they took fourth place as other teams dropped shots on the closing holes.

The Cardinals were playing on their home END_OF_DOCUMENT_TOKEN_TO_BE_REPLACED