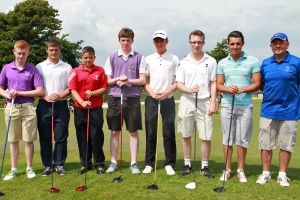 The final second round match in the Fred Daly took place on Tuesday with Fota Island and Mahon playing in Cobh.  Fota were missing Jack Howard who was competing in the Irish Boys Open in Thurles, but other than that they fielded a strong side.  Fota had an advantage in terms of handicaps but Mahon put it up to Fota and every match went as far as the 16th at least.  Fota’s Paul Twohig and Ronan O’Connell END_OF_DOCUMENT_TOKEN_TO_BE_REPLACED

The second round of the Fred Daly took place at Fermoy and Cobh on Saturday with seven matches down for decision.  Unfortunately  END_OF_DOCUMENT_TOKEN_TO_BE_REPLACED