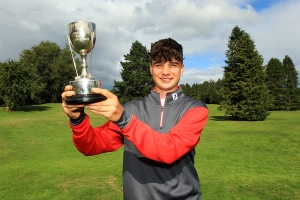 Mel Deasy (Bantry Bay) pictured with the Munster Under 15 Close trophy after winning the title in Roscrea.
Picture: Niall O’Shea

Mel Deasy scooped his first Munster title today when he won the Munster Under 15 Close title in Roscrea.  The Cork man shot a one over par 72, three early birdies saw him reach -2 two at one stage but two late bogies meant he finished on +1.  The bogies didn’t hurt Deasy as he had a four shot margin over second placed Alex Dineen from Cork.  It was an all Cork podium as Jack Murphy (Douglas) took third place, after a countback with Dineen.

Rory Milne (Faithlegg) retained the Munster Boys Under 17 title  after shooting a fine three under par 68.  The Waterford golfer won the event last year in Kinsale and becomes the first golfer to win the age-grade event twice.  Milne turned on level par but blazed through the back nine with three birdies in four holes.  Milne parred his END_OF_DOCUMENT_TOKEN_TO_BE_REPLACED

Munster inter-provincial player Edward Walsh led a strong charge from Mallow today at the Munster U15/17 Close at Carrick on Suir.  Walsh was two clear of the field at the end of play, posting a one under par 71.  Walsh got off to a great start with a birdie on the first hole but he went on to bogey the index two 4th hole.  He played some very steady golf after that, carding 12 pars and 2 birdies.  He stood on the 18th tee on -2 but a frustrating three putt on the final hole was the only blemish on a great performance.  Walsh, playing off 2, was a member of the victorious Munster U16 Interprovincial team recently.  He finished two shots clear of Cahir Park’s Ian Halpin and Fota Island’s Shane Galvin was third with a 74.

Killarney’s Luke Walsh won the Under 15 prize, thanks to a birdie on the last which meant that he beat Mallow’s Daniel O’Sullivan by a single stroke with a 75.  There was more good news for Mallow when Ronan Feerick took third place, carding END_OF_DOCUMENT_TOKEN_TO_BE_REPLACED

Pictures from the course in Carrick on Suir

Pictures from the Prize-giving

Munster Boys U15 U17 CLOSE Championship 2016 End of Day Results:

Pictures from Carrick on Suir: END_OF_DOCUMENT_TOKEN_TO_BE_REPLACED