Ireland had a super win against hosts Denmark in semi-final of the European Seniors today.  In a match that went all the way to the wire Ireland ended up on the right side of the result after one additional hole.  Alan Condren won with a few to spare and Steven Graham won on the 18th.  Karl Bornemann & Jim Carvill lost their foursomes match on the 17th, and Peter Sheehan also lost his singles match. With four matches in the score was 2-2, meaning O’Brien’s match would decide the outcome.  The Castlemartyr member was one down after 15, and despite winning the 16th the momentum shifted when he lost 17 to a birdie.  With the pressure of the match on him, O’Brien birdied the last to extend the match.  On the 19th, he calmly slotted a ten foot putt to send Ireland through to tomorrow’s final.  It’s been a great week for O’Brien on his international debut, and his form has been matched by his teammates who also have been very solid all week.  Ireland now face England tomorrow in the final. 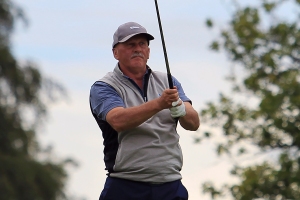 Pat Lyons has been included in the Irish team for the Seniors Home Internationals later this month, making it three Cork golfers in the seven man team.  It’s a first international call up for the Cork Golf Club member, and his selection END_OF_DOCUMENT_TOKEN_TO_BE_REPLACED