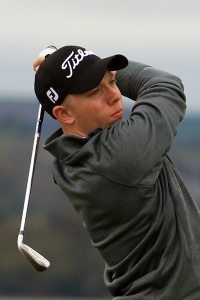 Cathal Butler is the last Cork golfer left in the Irish Close at Ballyliffin, winning both of his matches today.  The Irish international and Munster Strokeplay winner beat Jonathan Yates 3&2 this morning and followed that with a 19th hole win over John Cleary.  Butler faces Jake Whelan in the second match tomorrow morning and is off at 8.09am.

Despite finishing in the top 20, James Sugrue ended up with one of the toughest draws, he was up against defending champion Tiernan McLarnon.  Unfortunately for Sugrue, McLarnon won on the 16th, and he also won in the afternoon to go through to the last 16.

Both John Hickey and John Murphy won their first round matches but exited the competition this afternoon.  Hickey beat Ronan Mullarney on the 18th today, and he took Richard Knightly to the 20th hole before losing out to the Royal Dublin man.

John Murphy saw the 20th as well, his morning match needed two extra holes before he saw off Rob Brazill.  The effort took it’s toll as the Kinsale man was beaten 5&4 by Gareth Lappin.

Two more rounds take place tomorrow before the semi-finals and final on Saturday.