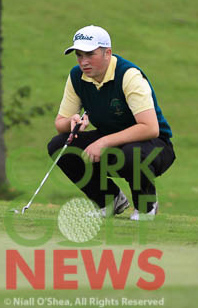 UCC Golf Club gained the bragging rights over Cork IT after the first inter-varsity league event in Cork Golf Club.  The first event was a huge success, ten matches were played with seven of them reaching the 18th green.  UCC won six of the matches, Cork IT claimed three with one matched halved after 18 holes.  Cork IT took an early lead thanks to wins from Adam McSweeney and Jack Murphy

The matches proved to be very close with the organiser’s idea of matching handicaps working out very well.  The event has proven that both UCC and Cork IT have a great depth of quality golfers, and the competition provided a platform for competitive golf very early in the year.  The league came about after Cian Kidney and Dave O’Sullivan got together with the hope of creating a competitive format for both colleges.

Following the success of the first event, the next round is scheduled to take place in Muskerry Golf Club in two weeks time.  Five events in all are planned for series of events that are being kindly hosted
by local clubs.