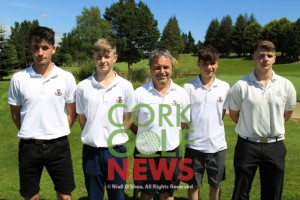 Bantry Bay overcame Cobh this afternoon to advance to the Munster Finals of the AIG Junior Cup.  Bandon was the venue for the South Munster area final and the course was like the weather – spectacular.  It was an eagerly awaited final, both team had qualified for the area final as hosts in their respective sections.  Despite an early charge from Cobh, Bantry Bay took hold of the contest.  Darren Devlin won a point for Cobh but Bantry Bay won with Mel Deasy, Patrick O’Riordan and Darragh O’Sullivan Connell.  As Bantry had three points in the match between Neil Crowley and Eoin Wilson was called in and the final score was recorded as 3.5-1.5.

Bantry Bay now join Mallow (AIG Senior Cup) in booking their place in Tralee next month for the Munster finals.