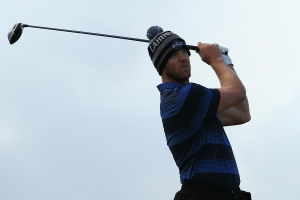 Peter O’Keeffe in action in Lahinch at the South of Ireland.  Picture: Niall O’Shea

Peter O’Keeffe and Jame Sugrue are through to the last 16 after a tough day at the AIG Irish Close Championship at the European Club.  O’Keeffe, who had been struggling with illness yesterday, had a one hole win over Noel Crawford this morning, that was after being one down at the turn.  In the afternoon he faced John Murphy in an all-Cork clash.  Murphy wrapped up his first round match against Gary Cullen on the 12th signalling he was still the form player.  It was O’Keeffe who started better, going two up after the first three holes.  Murphy recovered quickly, levelling the match by the 6th, and he held a one shot lead at the turn.  O’Keeffe had another purple patch on the back nine, he was one up through 15, and he won the 16th to double his lead.  He won the match on the 17th, winning that hole to record a 3&1 win over Murphy.  O’Keeffe will face Jack Walsh in tomorrow’s third round.

James Sugrue also continued his recent run of positive form.  Although his performance in the strokeplay stage wasn’t up to his usual standard, he qualified and he made the most of that today.  A 5&4 win over Dave Lowry this morning was followed with an 18th green win over Nathan McCann.  He now faces Conor Purcell in one of the most attractive third round pairings.

Macroom’s Padraig O’Connor has a great result this morning, beating Joshua McCabe by one hole in the first round.  Having made it through to the final 32 in the afternoon he lost out to Dylan Brophy in the second round.  There was no joy this morning for John Hickey, Cathal Butler or Gary Ward, all three losing out.  It was especially tough for Ward, he lost out again on the 20th, similar to his exit from the South two weeks ago.