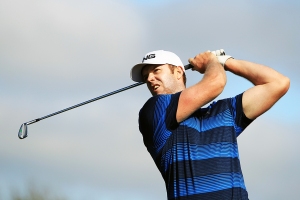 The O’Keeffe train kept on pulling today.  After well over a week on the road Peter O’Keeffe put together back to back wins in Portstewart today to get through to the last 16 in the North of Ireland.  He had another action packed day today, at 8.03am he was on the first tee facing Eoghan Collins.  A steady performance saw him dispatch the Laytown & Bettystown member on the 16th.  This afternoon he faced Rosslare’s Ian Lynch, and the Douglas man got off  to a flier winning four of the first seven holes.  O’Keeffe held his lead before eventually winning 3&1.  He’s now safely through to tomorrow’s third round where he’ll face Tandragee’s Jake Rowe.

After spending most of last week in Lahinch where he was working with Robin Dawson, O’Keeffe left Co Clare on Sunday to head for the North, where he had an afternoon tee time for the first round in Castlerock.  A poor start on Monday (+5) was followed by a very impressive 69 on Tuesday when he played on Portstewart’s championship links.

Paul Buckley had a good win this morning when the Kanturk native had a 4&2 win against Barry Cashman.  That saw him face Geoff Lenehan in the second round. Buckley was one up early doors but Portmarnock’s Lenehan, who was tied as the strokeplay leader battled hard and won 4&2.

Cathal Butler was a casualty in this morning’s first round.  Despite a bright start which saw him go two up on Aaron Edwards Hill, the Englishman fought back and beat Butler on the 17th.