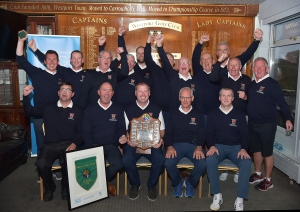 Charleville won the All Ireland final of the AIG Pierce Purcell Shield in dramatic fashion on Saturday, with a sudden death win over Castlebar.  Paddy O’Kelly and Ciaran Herlihy were the hero’s for the north Cork club after they won their match on the 19th hole in Westport late on Saturday afternoon.

Danny Deady and Trevor Barry put the first point on the board for Charleville but Castlebar won the next two points to give them  2-1 lead.  With two matches left on the course, Charleville were one up and all square.  John O’Keeffe and Ger Mullane won on the 18th to level the match, and when O’Kelly and Herlihy halved their match on the 18th, it was on to sudden death.  On the 19th a par would do for the Charleville pair, when Castlebar couldn’t match it the large crowd of Charleville supporters celebrated on the first green.  It’s the ninth win in a row for Munster clubs in this competition, but the first for a Cork club in man years.  It’s a second Purcell title for Charleville, and coincidentally it’s their second win in Connacht.  Back in 2006 they won when Enniscrone hosted the finals.  Needless to say one of the proudest men in Westport was the Charleville team captain Anthony Fitzgerald.  “It’s not good for the heart, I swear to God,” said Fitzgerald.  “For my own team and supporters, I’m thrilled.  We’re just absolutely over the moon. We’re a club that were going very well a few years ago but the recession hit us.  We’re coming back bit by bit and days like today make everything a little bit easier.”