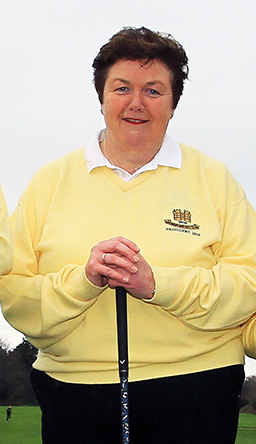 The AGM of the ILGU took place last weekend and it was a special occasion for Monkstown’s Ada O’Sullivan as she was awarded Honorary Life Membership by the national governing body.  Ada has one of the most comprehensive records of any female golfer in Ireland.  She represented Munster, as a member of the girls’ team in 1980 & 1981 and the Women’s Team from 1982 -1997, fifteen years.  She was the first ever winner of the Girlie Hegarty Trophy in 1994.  As a player she represented Ireland at the Girls’ Home Internationals in 1980 & 1981.

She then played on the Women’s Home International Team seven times between 1982 & 1997 and at the Women’s European Team Championships in 1993, 1994 and 1995.  She was the winner of the Sherry Cup in 1994 (European Masters 72 hole stroke play).  Following her playing career, Ada represented Ireland as Captain of the Girls’ Home International Team in 1999 & 2000 and the Under 21 Team at the European Championship in 2000.  She would go on to become the first High Performance Director on the ILGU Board in 2010.

Her first experience of Captaining a GB&I Team was at The Espirito Santo Trophy in Malaysia in 2002.  This preceded GB&I Captaincy in 2003 & 2005 when her Team brought home the Vagliano Trophy playing at Co. Louth.  In 2004 and 2006 Ada was invited to be Captain of the GB&I Curtis Cup Teams.  ILGU President Brigid McCaw was delighted to present Ada with the award on Saturday.  “Ada is a very capable, strong, fun loving person who – when asked to take on a responsible task – takes it on with great enthusiasm and leaves no stone unturned to make it a success”  said McCaw upon presenting her with Life Honorary Membership.  “We are very proud of all our Honorary Life Members and Past Presidents.  I would like to take this opportunity to thank them for being, as it were, “on call” and for their willingness to sharing their experiences and sound knowledge.”  Life Membership was also conferred on Pauline Martin from Killiney.  Outside of golf, Ada has run a large and very successful electrical business for many years and is still a regular in Monkstown.  She continues the long O’Sullivan association with the club, and having served as Lady Captain a while back, she was President of the club to years ago.  It was a fitting tribute to the Monkstown golfer, on the final AGM for the ILGU before the formation of Golf Ireland later this month.  The final AGM of the GUI will mark the transition to the new governing body and the start of a new chapter for amateur golf in Ireland.