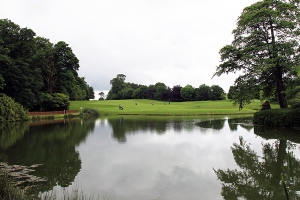 While Fota Island can be regarded as Cork’s top championship golf location, not many people will know that the Fota was the site of the first record organised golf in Cork.  Back in 1883, over 135 years ago the first course in Cork was laid out on the Smith Barry Estate.  The course in Fota was the second recorded course in Ireland, and it lasted around 30 years until the game spread by way of the large increase in the number of courses and clubs.  It’s not known where exactly on the island that the course was located but it’s unlikely that it was on the site of the current course.  Owned by Lady Barrymore who lived in Fota House, the course was a short nine hole layout and was mainly used in the early days by the Officers of the British Army stationed in Cork.  Although it boasts the earliest records of the sport in Cork, it seems that there was no golf in Fota until 1993 when a new course was established by an international property investment fund.  A fore runner to the current championship layout, the course was popular among local golfers and hosted the Irish Amateur Open and the Irish Club Professional tournaments in the early years.  All changed at the turn of the century when Dr Tim O’Mahony’s Killen Investments commenced a multi-million pound investment and redeveloped the course into a European Tour level course.  That course hosted the Murphy’s Irish Open in 2001 and 2002.  In 2004 there was another change of ownership when the course was bought by John Fleming who set about a substantial development that saw a hotel and housing development.  The property play was combined with a new nine hole course in addition to the development of an extensive academy.  In 2006 the resort hosted the Irish Seniors Open before the recession resulted in the property going under the control of NAMA.

The current owners, the Kang Family bought the resort in 2013, and following some changes on the championship course, in 2014 it hosted the Irish Open for the third time, setting records for the number of spectators.  Fota Island remains the premier championship and resort destination in Cork, setting standards in the design and quality of the 27 holes, as well as the tour level practice facilities in the Fota Island Academy.  Hopes are high that the European Tour will return with an event the near future but it still remains accessible to Cork golfers with affordable open competitions and great offers for societies.  Members still comes at a cost as the resort is one of just a few Cork clubs to have a joining fee.  Here again though there are options as there is now an option to join the “new nine” as an associate member of the resort.

Youghal’s golfing history can also be traced back well over 120 years.  Like many other clubs, different land, courses and clubs have been involved over the years but it started with a nine hole course along the seashore which was laid out in 1897.  Again in common with many clubs of that time, the course was in close proximity to the train station, and in 1898 the first club in Youghal was established.  A new location was found in 1911 when the club affiliated to the GUI, and this again was close to the beach in Youghal.  The club moved to the current location in Knockaverry seventy years ago in 1940.  The hilltop location has some amazing views over Youghal Bay, and the course itself is a fine parkland test of golf.

Midleton is another town where golf can be traced back to the 1890’s when the records show the for first course in the town was in the grounds of Midleton College.  Courses came and went and it’s wasn’t until 1969 when a farm in Gortnacrue on the Eastern side of the two was converted into a course by the Moloney family.  East Cork Golf Club became one of the most popular clubs in Cork, and last year they celebrated 50 years of golf.  The Eddie Hackett designed course remains a popular location and the Moloney family continue to work closely with members to provide a great experience for everyone visiting the course.  Harbour Point opened in 1993 in Little Island after it was developed by the O’Connell family, but closed in 2009 when it was under the ownership of the Scally family.  The mens club ceased but the Ladies club moved to nearby Waterrock and.  Waterrock had opened in the 1990’s as a very popular pay and play course, and the link with Harbour Point Ladies has been vey beneficial for both.

Cobh Golf Club was founded in Ballywilliam in 1987 as a nine hole course, but ambitions were strong and just over twenty years later they celebrated the opening of their new course in Marino.  The new course, perched high over Cork harbour attracted a large membership from the surrounding areas, and in addition to the course the club has developed a new clubhouse, proshop and practice facilities.  It remains one of the newest courses in Ireland given the downturn in course development of the past decade.

Castlemartyr was one of the latest new developments and was opened for play in 2006.  Initially the Ron Kirby designed course commanded a big joining fee, and along with the hotel it was styled as a seven star resort.  The intervening decade saw a major downturn in all aspects of hospitality and sport, and now the golf offering is more modest in terms of cost but every bit as good in terms of the course.  One of Cork’s most popular society destinations the club now proudly boasts a large gents, ladies and junior membership.