Lee Valley have just launched their Senior Scratch Cup, the event is taking place in April and is again sponsored by Boylesports.  The Irish firm will again sponsor the Lee Valley Senior Scratch Cup which takes place on the 25th & 26th April.  The continued support from Boylesports means the club can again stage a top class event with a generous prize fund in place.  The 54 hole event has become one of the biggest three round events in the country.  2019 winner Tiarnan McLarnon will be back to defend his title, the Irish International had a great season after his win in Cork last year and he’s be fancied to continue his great run of form in Lee Valley.  Tournament Director Vincent Drinan is busy taking bookings at the moment and anyone interested in playing should contact him on email (vinced9@gmail.com) or WhatsApp (087 9966332).  The closing date for entries is 15th April and the field is limited to the lowest 75 golfers.  Onsite accommodation, a great clubhouse atmosphere and a great championship course all combine to make the Lee Valley Scratch Cup a great early season event.  Last year McLarnon broke the run of Cork’s Gary O’Flaherty who won two in a row in 2017 and 2018.  A top class field of international and provincial stars is expected in Lee Valley next month and competition is sure to be stiff as golfers aim to build form for the season.  Lee Valley Captain Peter O’Driscoll is looking forward to the major competition and he’s delighted to have the title sponsors back on board for the 19th staging of the event.  “It is very good for Lee Valley to have Boylesports support for the 3rd year as our sponsor” explained the Captain.  “We have built up a very healthy relationship with Peter Tuite and Boylesports over the years and it raises the profile of the Senior Scratch Cup even higher with Boyles as our Sponsor.  To run our Senior Scratch Cup and to keep our World Golf Ranking status is a time consuming and expensive event.  Work begins both on and off the course after the completion of the previous years event.  Under the guidance of tournament director Vince Drinan over the last ten years, the field has grown stronger every year with six Irish internationals competing in 2019 with International Tiarnan McLarnon of Massereene Golf Club winning out. 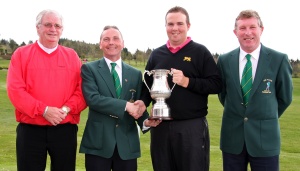 Probably the highlight of the Scratch Cup was the winning of the Cup in 2009 by current Open Champion Shane Lowry playing in his last amateur event.”  The scratch cup sponsors are they also sponsoring the Boylesports Open Fourball weekend in early April.  Entry is just €25 (€10 for members) and there are some great prizes on offer.  The top prize is a VIP trip to the 150th staging of the Irish Grand National at Fairyhouse which takes place on Easter Monday 13th April.  As well as looking forward to the Senior Scratch Cup, the Captain is also busy with the day to day affairs of the club, and the recent poor weather has been a frustrating element for all golfers.  “It has been very frustrating not to have regular golf so far this year especially as the year started so well with the golf course open all over the Christmas holidays” said Peter.  “It probably has been the frost that has closed the course more than the wet weather as there has been an intensive sanding programme carried out over the last few years by the golf club and we are seeing the benefit of it presently.  We are playing regular golf at this time of the year, where in years gone by the course would have been closed and that is as a direct result of the investment of the sanding programme.  Last year we purchased a golf simulator and this is available to our members during golf club opening hours and has proved to be a great success and very popular especially at this time of the year and especially when the course is closed.”  Lee Valley like all golf clubs in Ireland face two big changes later this year that will have a major impact on the game.  Golf Ireland will come into being to form the new governing body for the all amateurs in Ireland, and the handicapping system is changing later this year and the new system will challenge golfers as it’s a big move from the current system.  “The World Handicapping system is being implemented in November of this year and there will be a lot of organising and planning that will have to be put into place before November as this seems to be a very complex system.  Also at the end of this year we will see the formation of Golf Ireland so preparations are being put in place for this.  We will be forming sub committees for both the World Handicapping and Golf Ireland transitions.  As of last Sunday under the guidance of our Junior Conveyor Declan Farrell and our Golf Professional Ian Stafford our Junior section took to the course.  Our Junior section has been a very important part of our club, the objective of our Junior section is to introduce young people, both male and female to the game of golf in a safe, enjoyable and care free environment.  The Lee Valley Junior section caters for young golfers of all ages and abilities starting from cadets from the age of six up to eighteen.”