While courses are still closed, the planning for 2021 continues in Golf Ireland.  Last week the new governing body announced the area pathway panels with 30 Cork golfers selected for the development programmes.  Douglas and Bandon topped the pile, Douglas saw seven of their young golfers selected between the three boys groups and the two girl groups, while Bandon had seven girls selected for the programme.

Douglas youngster Justin Dennehy was selected for the U12 programme, Barry O’Connell made the U14 panel while Shane Collins is on the U16 panel.  In the girls panels Hailery Martinez and Julie Kingston are on the U14 panel, and Rhea Itty and Aoife Keating made the U17 panel.  Bandon’s Alannah McCarthy, Ellen O’Mullane made the Girls U14 panel while Katie Hannon, Rachel Gaffney, Muireann McCarthy, Hannah Buckley and Megan O’Callaghan all made the U17 panel.  Muskerry’s Stephanie Hetherington, Emma Dilworth, Aoibhe Linehan and Aoife Tuite are on the U14 panel and Aisling Dilworth is on the U17 panel.  The selection is a great boost for Bandon, Muskerry and Douglas who have invested in junior golf, but there were many more clubs represented including Youghal, Kanturk, Mitchelstown, Kinsale, Cork and Doneraile between the 30 golfers. 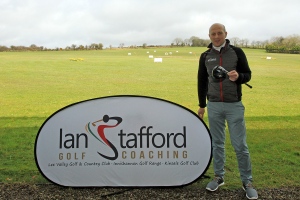 The area co-ordinator for the programme is Ian Stafford.  The PGA Professional previously worked with both the ILGU and the GUI in coaching roles, and his work with Kinsale and Lee Valley has seen many young golfers develop into stars of the future.  The Area Development Programme is the first stage on Golf Ireland’s new framework which aims to provide opportunities for players to achieve their full potential, from basic competencies to representative honours.  It also includes the Team Ireland level at the top of the framework, this is a level for professionals who are funded by Sport Ireland at the beginning of their careers.

There were ten Cork golfers selected in the in the performance development squads announced late last year.  Performance Development in the next step after the area development programme, and selections here are based on Order of Merit results as well as handicaps.  Four local golfers made the boys U17 squad, they were Eoghan Cassidy (Kinsale), Zak Collins (Muskerry), Charlie Flavin (Youghal), Louis Galvin O’Carroll (Kinsale), while Monkstown’s Michelle Sharkey made the girls Under 17 squad.  John Doyle (Fota Island), Matthew Kelleher (Fota Island), Ronan O’Keeffe (Monkstown), Paddy Quill (Cork) and Sean Reddy (Douglas) were the successful golfers on the Under 15 squad.

Robbie Walsh from Kinsale was a previous member of the Irish Boys squad, and last week he announced that he’s heading to the US next year.  He’ll be starting as a freshman in The University of Tennessee in Chattanooga in August.  The Division 1 college has solid reputation in on the NCAA SOCON conference and they’ve had several top ten and top five finished this season.  Walsh will be looking forward to the start of the championship season in Ireland as a way to get back into elite golf before heading to the US later in the summer.  Irish interest in the US College scene is at an all time high with four Cork golfers currently playing in the US college system.  There’s also Aaron O’Callaghan who’s coaching at Wake Forest.  He move there from Louisville and is working with Head Coach Jerry Haas at the college where the great Arnold Palmer developed his game.  The Deacons are currently ranked as the second team in the national standings, and O’Callaghan’s team have three team victories so far this season.  O’Callaghan isn’t the only Irish man in Wake, second generation Corkman Mark Power is in his second year at the North Carolina university, the son of Eileen Rose Power and nephew of Brendan McDaid has had a good start to his season.  He’s currently ranked as 27th in the world and is on the current Walker Cup panel.  Kinsale’s John Murphy is also part of the current Walker Cup panel.  His Louisville team are in action in Texas this week.

Golf Ireland celebrated International Womens Day on Monday by looking at the development of their #levelpar programme which launched in 2019 to establish fairness for all in golf.  Supported by Sport Ireland, the programme was built on the pillars of coaching & officiating, active participation, leadership & governance, and visibility.  The national 20×20 drove visibility of female sports including golf and with over 100 clubs running girls participation programmes, there are now 40,000 active female golfers in Ireland.  There was positive news on the governance side too.  At the recent Golf Ireland AGM 46% of the inaugural board elected were female and 42% of the Golf Ireland regional committees are also female.  Over 75% of the clubs in Ireland have signed up to the Women in Golf charter and hundreds of club volunteers have engaged with the Level Par webinars and governance initiatives.  In its short existence Golf Ireland has proved its commitment to fairness for all and clubs too are embracing new governance models including the One Club model.  More details on the Level Par programme are available from the Golf Ireland Club Support team.