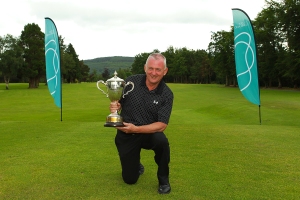 John O’Brien bagged one of his most impressive wins to date when he captured the Munster Seniors Amateur Open in Tipperary Golf Club last week.  The Castlemartyr golfer was in fine form, shooting under par on both days to win by a margin of four strokes.  O’Brien shot an opening round 71, his one underpower total was just one shot off the lead. He returned on the second day and shot a hugely impressive 69.  His very steady round comprised of three birdies on 15 pars.

“It was a great week, I played well and drove the ball well” said O’Brien after his win.  “I didn’t miss many fairways and the greens were excellent.  I putted great didn’t make many mistakes.  On the back nine on Wednesday knew I had a chance so avoiding bogeys was all I was trying to do for the last few holes.”  Kinsale’s Kieran McCarthy also featured in the prizes, a second round 67 which was the best score of the two days saw him jump into fourth place.  Cork’s Pat Lyons took the 60-64 prize while Tom Cleary narrowly missed out on the Munster Veterans title after losing on a countback to Adrian Morrow.

Tipperary Golf Club are celebrating their 125 anniversary this year and the course was in superb condition for the Munster Championship.  They will be hosting two further Golf Ireland events before the end of the season and there will be plenty of opportunities to play in upcoming open events.

O’Brien will hope to build on his Munster form when the next events on the Seniors schedule take place.  With the help of his employers McGuirks, John will be hoping to get time off for the Irish Seniors in July and the Connacht Seniors in August.  If his form holds, he’ll be a strong contender for another cap with the Irish Seniors for their European and Home Internationals matches.

Another Irish Senior who featured in the news recently was Karl Bornemann.  The Douglas golfer, who recently took over as chairman of the club, was second at the European Senior Championship in France recently.  Bornemann narrowly missed out on the win and lost out by one shot having been tied for the lead during the round.

Ballybunion hosted the Irish Women’s Close last week and there was a strong Cork challenge at the start of the four-day event.  For four of the golfers it was their first opportunity to play in Ireland following a long college season in the US for the stop Mairead Martin, Sarah Byrne, Valerie Clancy, and Rachel Thompson all spent the past academic year in the US competing in NCAA college programmes.

Douglas golfer Sara Byrne had the advantage of competing in the British women’s amateur in Kilmarnock two weeks ago, and she hit the ground running with some very solid match play performances.  The 2018 winner finished in up in 3rd place after the 36 hole stroke play stage and  won her first two matchplay matches before the 14th tee.  Her hopes of winning a second title were cut short when she lost out in the quarter-final to Shannon Burke.  Kanturk’s Mairead Martin won her first round match but lost out to 13 year old Olivia Costello in the second round.  Costello went on to reach the semi final.

One of the key matches in Saturday morning was the all-Cork pairing of Rachel Thomson and Valerie Clancy.  Clancy attracted some local support thanks to her strong links with Killarney, while Thomson had support from her a few Cork supporters including her mum Ailish who had competed in the Strokeplay qualifier and the plate match play earlier in the week.  The quality of golf from the pair was very strong with Clancy getting the better of it to find herself a few holes up at the halfway stage.  Clancy had a chance to close out the match on the 14th but her putt stopped on the lip.  Thompson took advantage and won the 15th and 16th to get the match back to two down.  When Valerie lost her ball off the tee on 17 it looked like they were headed for the 18th, but Rachel along with a small crowd of spectators failed to find her ball.  The hole was halved and Clancy advanced.  The quarter-finals marked the end of Cork interest with both Byrne and Clancy losing.  The event finished on Sunday when Anna Foster beat Beth Coulter in the final.

This week sees plenty of interclub action taking place. In all there are 19 interclub competitions with the majority of Cork clubs now competing in Munster East.  Several preliminary round matches took place last week and this week sees a much larger number of first round matches.  Cork Golf Club had a good start to their campaign, advancing in both the Senior Cup and Barton Shield.  They had a good win over East Cork in the Senior Cup and had a narrow win over Castlemartyr in the Barton Shield.  Fermoy and Monkstown are also through to the next round of the Senior Cup.

There are a large number of opens and scratch cups taking place over the coming weeks.  Fermoy’s Minor Scratch Cup takes place this Saturday and Sunday.  The competition is once again sponsored by Barnes Jewellers Fermoy and it’s open golfers with a handicap index of 15.0 and above.  The East Cork Maurice Moloney Memorial singles continue every Tuesday in East Cork  Entry is €5 for members and €20 for visitors.  A comprehensive list of open events and competitions is available on the Golf Ireland website.