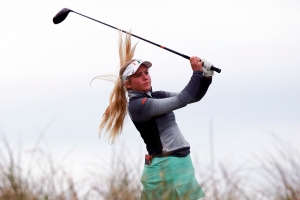 Sara Byrne made another jump forward in her golfing journey, the Douglas golfer was named in the Irish team to compete in the European Team Championships in Royal County Down next week.  This is the first senior womens cap for the 19 year old golfer and she was delighted to be named in the team.  “I’m delighted to have been selected on the women’s team” said Sarah after the announcement, “I’m over the moon to get my first senior cap!  It’s really nice that it’s on in Royal County Down, a nice home advantage for the week.  I’m really looking forward to RCD, we have quite a young team but I think we have a great chance going into the week.

The Irish team was selected following the Irish Womens Close in Ballybunion two weeks ago, and that was another event where Byrne impressed.  The 2018 winner reached the quarter final stage having impressed in bother the Strokeplay qualifier and the early match play stages.  Sara has had a busy few months, spending the first five months of 2021 in Miami.  Sara completed her first year in college, after a quiet Autumn, the NCAA season kicked off in February and she represented University of Miami in all of the spring events.  After finishing the NCAA season, Sara was back in action in Scotland at the Womens Amateur Championship where she reached the quarter final stage.  It was back to Ireland and on to Ballybunion after that so Sara did manage to get in some down time with no tournament golf for two weeks.

“Last week I just recovered from the past two tournaments, rest is a big part of my programme so I’ve been taking it pretty easy between all the British Amateur and the Close.  This week I’ll be back in the gym with Luke Dennehy and working with Fred before heading up to Royal County Down.”  There was some golf for Sara at the weekend, she helped Douglas to a Senior Cup win over neighbours Monkstown and a pro-am appearance in the Dubai Duty Free Irish Open in also part of the plan before heading to up to Co Down to prepare for the Europeans.

There was a further reason to cheer in Douglas Golf Club on Friday when Jack Murphy won the Leinster Boys Under 16.  Murphy along with a number of Cork golfers were in action in Delgany for the 36 hole two-day event.  Murphy, who featured on the Douglas Senior Cup team shot the low round on both days on his way to claiming his first Golf Ireland title.  He shot on opening 69 to tie for the lead at the halfway stage, and his second round 71 meant that he won by two shots.  It was closer than that with a few holes to go through.  Fionn Dobbin from Malone was two shots ahead playing the 15th but a double bogey meant that the two overnight leaders were level again with four holes to play.  The 17th hole proved crucial, Murphy birdied the long par four while Dobbin took five shots.  That meant Jack had a two shot lead playing the last and when he and Dobin parred the closing par five, the title was Murphy’s.

It’s a very positive start to the season for 15 year old Murphy who showed lots of promise so far.  He has been capped for Ireland, playing in a Senior Cup Munster final for Douglas and won the Kerry Boys two years ago.  James Walsh, now playing for Douglas finished in a tie for third four shots behind the winner and Kinsale’s Eoghan Cassidy was 6th.  Matthew Kelleher from Fota Island was tied for ninth place while Sean Reddy and Adam Harrington both finished in the top twenty.  Sean Deasy had a disappointing second round after tying for the first round lead with his level par 69.  Many of those are back in action in Athenry this week at the Irish Boys.  The 72 hole event will see Zak Collins and Morgan Cain join the Under 16 competitors in the showpiece Boys event of the season.

The Kerry Senior Scratch took place in Tralee last weekend, and unfortunately there wasn’t a cork winner.  While there was a large travelling party, the win went to Portumna teenager Sam Murphy.  The best of the Cork finishers was Greg O’Mahony.  He started brightly in Saturday with a 73 but a poor second round cost him.  A solid 74 on Sunday saw him finish in 9th place.  Mel Deasy and Paul Buckley both finished in the top twenty while Jack Egan made the top thirty.

The Inter-Club events are in full flow and last week saw most clubs feature in at least one competition.  The first round proper has now been completed in many of the mens and womens events, with the majority of Cork clubs competing in the Munster East section.  The first round in the AIG Jimmy Bruen Shield was completed last weekend and there are eight teams remaining.  Monkstown, Cork, Raffeen Creek and Douglas are all in the top half of the draw while Lee Valley, Clonakilty, Muskerry and Macroom are in the second half.  The round one Barton and Senior Cup deadlines have also passed and there’s a quick turn around to the next round in many competitions.  In some cases the next round of matches need to be completed by 7th July.  While around half of the teams are now out following the first round matches, it promises to be a busy July for those who are still involved.  The home and away format will continue for the next few rounds until the Munster East area final is reached.  Cobh hosted the first of the Boys Inter-Club qualifiers last week and East Cork were the winners on the day, finishing two points ahead of Monkstown with Cork Golf Club in third place.  East Cork now go on to the Munster area finals.