For the first time since qualifying as a PGA Professional, Monkstown’s Shane Irwin is looking forward to a normal season.  The Limerick native traded in his hurley for a golf clubs a few years back and started his PGA training.  Irwin completed his PGA studies in 2020 but the past two years were interrupted with several lockdowns.  Like plenty of others in golf, he thinks 2022 will be a bumper year for the sport and he has already seen a big increase in the numbers out golfing.

“The winter was much busier than previous years due to not having any sort of lockdowns compared to previous years” explained Irwin.  “In the first few months we had fantastic weather which got a lot of golfers out onto the course.  It really was our first proper winter using the Trackman studio with lessons and custom fitting.  The main areas I think golfers are working on this for this part of the year in particularis the short game and putting.  Indoor facilities like this, especially in the cold winter months,  gives a  golfer important putting and swing analysis along with video technology.  After each lesson we can also send a video summary to each golfers which includes some drills to work on.”

Irwin has been based in Monkstown for just over five years.  In that time he has completed his PGA studies, qualifying in 2020.  Monkstown is now home to three PGA Professionals with Cian McNamara leading the team.  While Cian and Shane are from Limerick, there was a Corkman added to the team recently.  Shane Livesey joined from Douglas last month, and just last week he completed his PGA studies to become a fully qualified PGA Professional.  With three teaching pro’s, access to facilities is key and Irwin is delighted with facilities available to members and guests.

“We’re looking forward to the club opening the new short game facility.  It will be a great addition to the already fantastic work been done by the club and it will benefit the club teams, Juniors and Members short games massively.  Once the short game area opens in May we will be providing a service with short game demo days featuring the leading brands to test and compare wedges and putters for players.”

While Shane is part of the pro shop team, he’s delighted to be part of the wider team that works in Monkstown.  A well as the team of four in the pro shop, there’s also an extensive food and beverage operation in the bar and restaurant, management and admin, and of the course staff in Monkstown have made huge strides in the past four years.  GM Maurice O’Meara has spearheaded a very successful membership drive and Ken Kearney has overseen the design and construction of a new short game area.  This will be followed by the development of a new driving range which will further add the members facilities.  One the course Martin Travers and his team have been working hard, and there was more good news last week when the club advertised for another full-time greenkeeper which strengthens their approach to course maintenance.

Irwin has been involved with Monkstown’s junior golf programme for a while now and this is another area where Monkstown are making strides with large numbers of juniors supported by the club.  “This year we will put an extra emphasis on junior coaching.  We now provide four junior golf coaching sessions every week between girls and boys and we also run ladies group coaching, team coaching,  individual lessons and custom fitting.  We have just over 120 juniors now in the club with boys and girls and there is massive work been put behind the scenes by junior volunteers.”  Shane is currently very busy with lessons and he’s also working on plans for the upcoming Easter Kids Camp.  Along with Shane Livesey, they’ll run the camp from 11th – 13th April aimed at kids aged 7-12.

Irwin also has plans to get out playing himself, and with a full schedule on the PGA Irish region there will be plenty of opportunities.  ““The year ahead will be busy with it being the first full year without any disruptions or restrictions but Shane, Cian and I will look forward to playing on the Irish region this year also.”

As a Limerick man in Cork, Shane was held the bragging rights since August, and despite the recent results he’s not changing his allegiance.  “I have listened to a lot of members giving me stick about Limerick recently.  I am not going to say much about it – but I’ve never seen the All Ireland won in March.  I really look forward to the match in the park against Cork, at the moment they are strong favourites based on current form.” 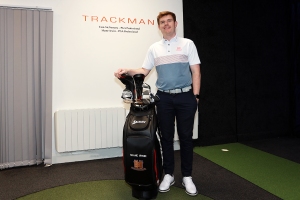