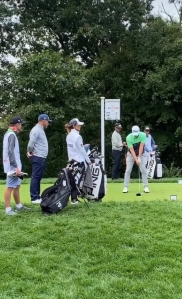 It was a 5.30am start this morning, it wasn’t really a problem as we were waking up around that time anyway.  We got to the club on time and had a bit of breakfast, and James did a good warm up again.  He did a final bit of putting before heading to the first tee.  It was cold this morning and a bit windy, but we were all systems go to hit a good number.  But a slight double cross off the tee led to a bad lie, and a hacked 8 iron got snagged by the rough around 20 yards short of the green.

That was the worst lie I’d seen all week and all of a sudden we’re walking off with a 7.  You plan and hope for a good start and you end up with a triple, I guess it’s typical of the US Open.  That set us back a bit but James played a lot nicer today.  He was six over for two holes and three over for the other 16.  I know all 18 holes count, but I think that proved he played some pretty good golf today when you look at some of the scoring.  He did get three birdies today, including one on the last hole, so it was nice to walk off those greens with something.  The guys playing with us were just as sound again today, and Bubba was very impressive shooting one under for the round.

The final score was disappointing but it was a great experience.  Lots of people were saying that a first US Open is always going to be tough but he wasn’t depth at all and it just wasn’t his week.

After the round I put the clubs away and we got a bit of lunch.  We went back out in the afternoon and followed Tiger, Rory and Justin Thomas for a few holes.  It’s very strange to be watching the most popular players in the world at a major, and have next to nobody following them.  We have no firm plans for the weekend, but we’ll probably watch some more golf while we are here.

Not a good day at the office today!  The morning went to plan, we got to the course and had a good warm up.  We followed the schedule and James was feeling good, he was hitting it really well on the range.  But when we got out on the course he missed his spots by a yard or two and that just killed him.  Its amazing that a yard or two can make such a difference but we knew it was going to be tight, and that small margin meant that James couldn’t get anything going.

Although the golf was tough for James, the company was good, Lee Westwood was absolutely sound to the both of us.  Bubba didn’t say much but his caddie Teddy was hilarious and a great character.  It was cool to see Bubba take a driver off the deck at one stage, you don’t see too many people trying that on tour.

We have an early start in the morning, we’re off the 1st tee at 7.34am.   That means a quick turnaround so we’re already switched on to the second round.  We’re here and we have a job to do.  The plan for tomorrow is very simple – shoot 65!

It’s getting closer to Thursday!  Mike and myself got to the course early this morning to walk the back nine and mark out all of the slopes in the yardage book, that was a help when James played it later on.  As planned, we played the back nine this afternoon after a short game and range session.  James is in good form and over the last two days he has done some great work.  He’s now hitting it the best I’ve ever seen him hit it, and that’s exactly what’s needed around here.  There’s still lots of talk about how tough the course is, although it’s mostly from the media now.  The players seem to be focused on getting around and staying out of trouble and that’s definitely what James is focused on. 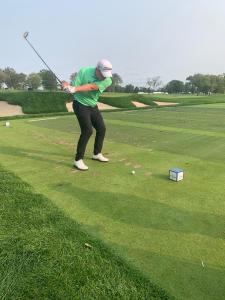 The lack of fans should help if anything, to be honest it makes things more relaxed.  I don’t think it’s an issue, apart from the cameras it’s just like most tournaments where I’ve been on the bag.  There wasn’t too many people following us for the first four days in Portmarnock, and even less when were in Co Louth or Rosapenna for qualifiers over the past two years.

The plan for tomorrow will be the same as any other tournament.  His tee time is 12.54 so we’ll plan to get to the course around 11.30, get some food and warm up on the range.  He’ll get a few chips and putts in before the walk to the 10th tee and then it just time to go for it.  I’m buzzing to get going now, there’s a great energy around the course with the tournament so close.  Hopefully he’ll play well and have a good number tomorrow, and hopefully we’ll enjoy it.  I brought the bag to the hotel room tonight to make sure the 1 iron came out of the bag, and to make absolutely sure I only had 14 clubs in the bag.

We had a bit of a change of schedule today.  James didn’t hit the course until lunchtime and it was straight to the range.  To be fair he’s hitting it as well as I’ve ever seen him.  He did some Trackman work and after a bit of adjusting he put a new Titleist TSi driver into the bag.  He was absolutely ripping it.  He also has a new 21 degree Titleist TS2 hybrid as the 19 degree was going too far.  I think this is a good sign, the last time he put a new driver in the bag was when we were on the way up to Portmarnock for the Amateur last year and he had a fitting at the GUI Academy in Carton House.

As we weren’t up to much with James this morning, Mike Collins and myself went to the course to go Tiger hunting!  We met him on the 16th,  he was playing with Justin Thomas so it was great to see the two of them hitting a few shots.  After Tiger finished I ended up saying a quick hello to his caddie Joe LaCava and I ended up getting one of the Bridgestone Tiger balls he had used.  I reckon I’ll never get another chance to do that so I’m glad I took the opportunity.

I also had a chance to talk to Harry Diamond who’s on the bag for Rory McIlroy.  He’s a really nice guy and we were chatting about golf back home as well as the course and the draw.  There’s seems to be plenty of talk about the course from a lot of players and caddies.  There’s been a lot on Twitter about the rough and the media are picking up on it, there has been a few videos too on the greens and some of the slopes.  A lot of players are giving out, but they’ll know where  they have to put it on Thursday, and how to plot their way around the course.

James seems to be happy enough about the draw, and I’m really looking forward to watching Bubba play golf.  The bag is ready now, we’re using James’ Irish carry bag so its nice and light and easy to drag around.  The only thing James really looks for during a round is water so I’ll make sure that I’ve plenty of that.  He’s pretty laid back when on the course so the only other thing I have to do is get the yardages right!  Thursday is getting closer now so the plan for tomorrow will be to focus the practice on the short game and play the back nine in the evening.

"Now that is mad" ~ Billy Foster

The greens at Winged Foot this week 😲#CaddieWorld #USOpen pic.twitter.com/KGEklEGiw5 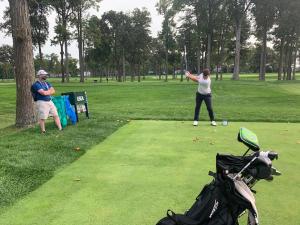 Another early start yesterday, we were first out on the course at 7.01.  We played nine holes and then hit the range for an hour or so.  The place is getting a lot busier now and practice rounds for the full 18 holes look like they are taking up to six hours which is mad.  It’s not the rough that causing the long rounds, it’s the slopes and the undulations on the greens.  The greens are running pretty fast now and everyone is trying to work out the angles, the slopes and the backstops.

After lunch myself and Mike went out to the back nine.  We had a good walk around and took plenty of notes.  The yardage book is fine but it doesn’t help in term of lines off the tee or slopes so we’ll have all that planned out by Thursday.  We still don’t know when we’re out in the first round.  The draw should be out in the morning, I think it might have been delayed due to the changes to the start list. 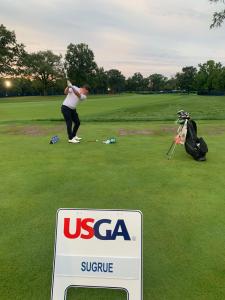 I think the week is going to be all about driving and putting.  The fairways are narrow, very narrow in places so James has been spending most of his time on the range working on his driving.  He’ll probably start working on his short game today and Wednesday.  It’s all aimed towards sharpening up, and his game should be in nice shape for Thursday.

Off the course very little is happening, there are very few people around and none of our friends and family from Mallow.  We’re in the bubble that the US sports have spoken about so it’s literally moving from the hotel to course, and from the course to the hotel.  The weather is nice, it’s around 23/24 degrees at the moment so it’s really nice.  It should be around the same on Thursday and Friday with a bit of cloud so that should suit us perfectly.

The rough is still the talking point for many people, we took the video below on the right of the 11th when walking the course.  That’s it for Monday, we’re heading down for a bite to eat now and we’re planning another early start in the morning.

The greens at Winged Foot this week 😱

After nearly a week out here we finally got to Winged Foot.  On Saturday evening we went over to register and have a look around and this morning we played the full 18.  We went out at 8.15, first on the course!  We played the full 18, it’s very long and the rough is crazy – thick and long.  The greens are a bit soft at the moment but I’d say they’ll firm up as the week goes on.  After the course we headed to the range for another 90 minutes, and James was hitting it very well.  Although the past week has been very enjoyable, it was great to finally get onto the course at Winged Foot.

The week has flown by since we arrived on Monday.  Earlier in the week we met up with Stephen Walsh from Portmarnock.  He had been in touch before we came out to see if we wanted to play a few courses.  We were a bit limited as we were following all of the Covid guidelines but we did get to play Garden City Golf Club in Esssex County with Stephen.  It’s a great course and we really did enjoy ourselves.  We all played well too so that helps.  Michael Collins joined us late last week so the three of us are here now.  It’s a bit disappointing that nobody could travel over to see the event but I suppose we’re lucky to be here.

We’re all set now for the week.  We had our first Covid test last Monday when we arrived and another one yesterday.  We got the all clear so it’s all eyes on the tournament, and we’re back out for another practice round tomorrow.