The Bruen Youths will this year mark the start of Muskerry’s Bruen Open week which celebrates the 80th anniversary of Jimmy Bruen’s magnificent victory in the British Boys Championship.  It also marks the 70th anniversary of Bruen’s win at the British Amateur in 1946.  This year’s competition is a 36 hole strokeplay event and takes place on Monday 15th August.

The Bruen Youths started in 1986 as a boys (under 18) competition but later moved to youths level.  There have been many famous winners, Professionals David Higgins, Cian McNamara, Mick Collins, Mark Murphy and Aaron O’Callaghan have all won, and Ronan Twomey and Dave O’Donovan are among very few Muskerry that have won for the home club.  Kinsale’s Cathal Butler did a rare double in 2013 and 2014, and Monkstown’s Sean Desmond won last year.

Waterville and former European Tour professional David Higgins has fond memories of his win in the Bruen Youths.  “It was always an exciting trip for the young lads at Waterville golf links, as you can imagine, a long trip to Cork was always great fun and one that each and every one of us looked forward to.” said Higgins, “Mr John A Mulcahy owned Waterville golf links at the time, he was our golf coach and mentor. He would always make sure we all had the best of golf equipment and when it came to trips like the Bruen boys,he would pay for our transport, food and accommodation.  Unfortunately I don’t remember any scores from the event. I do however remember having my first ever hole in one on the par 4 second hole! I hit my TaylorMade Burner 3 wood into the hole.  My caddy that day was Daniel Connolly. Dan is a local man to Muskerry.  We met up recently for the first time in 10 years.  He reminded me how both of us thought it had gone over the green and as we walked by the hole we saw it had gone in. I still have the ball. Titleist LT 100 number 4.” 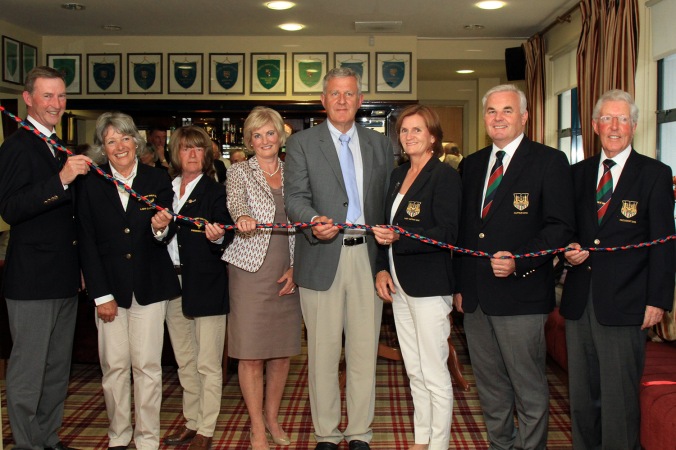 Phil Bruen and David Bruen pictured with Officers from Muskerry Golf Club and Cork Golf Club at the launch of the Bruen Corner at Muskerry. Picture: Niall O’Shea

Muskerry have a full week of events planned and this year each winner will receive a specially commissioned Bruen Medal in honour of the event.  Muskerry also formally opened the Bruen Corner, a collection of memorabilia and pictures relating to Bruen’s great golfing legacy.  Muskerry alongside Cork have a shared interest in the Bruen legacy.  Bruen won many team and inter-club events in Cork colours while representing Muskerry at several individual events.