Barry Anderson followed up his recent win the West of Ireland by claiming the Munster Strokeplay Championship in Cork Golf Club today.  Rounds of 70 & 72 saw Anderson edge out Peter O’Keeffe and Ronan Mullarney but one shot.  The 2014 champion won the West two weeks ago and followed up with another win today in tough conditions in Cork.  Anderson shot a two under par 70 this morning and needed to get up and down from the fringe on the 18th to sign for a 72.  Anderson was battling with Peter O’Keeffe, the Douglas golfer found a fairway bunker on 18, and a bad lie meant he couldn’t go for the green.  He had a 35 foot putt for par but missed, meaning Anderson won by a single stroke.  Ronan Mullarney had two rounds of 71 today and  finished tied for second place with O’Keeffe.  Mullarney also won the Carr Bruen trophy as the best Under 25.

Munster Golf Chairman Jim Long congratulated the winner, and thanked all involved with the successful staging of the event in difficult conditions.  He thanked Tournament Director Dave Prendergast, and Cork GC Captain Rob Reardon and their respective teams for their support and hard work in staging the event.  Click here for full results. 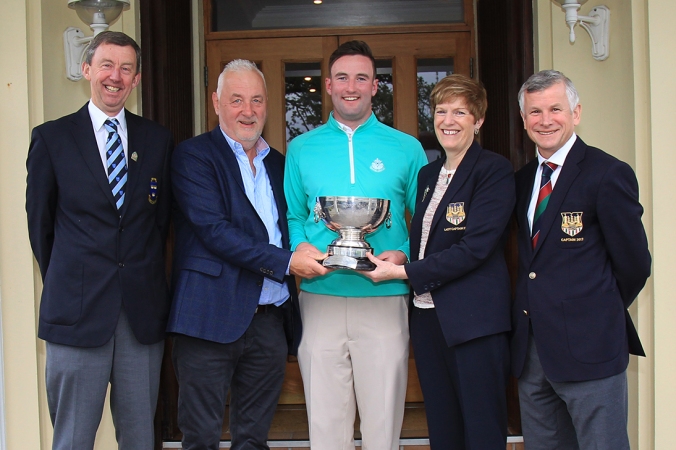