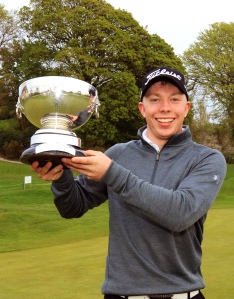 Most people will know that last weekend’s competition was the Munster Strokeplay, but not everyone will know that when the event was given Championship status it had the additional designation of “incorporating the Cork Scratch Cup”.  The Cork Scratch Cup is one of the oldest trophies in Irish golf and according to Cork’s GM Matt Sands, it the original cup that was awarded over 90 years ago.  The cup and base holds the names of the all of the winners.

The trophy was presented by William Dwyer, the same person who started the inter-society competition which still runs today.  Dwyer presented the trophy in 1923 and won it in himself in 1924.  The trophy bears the names of the great Cork Golf Club stalwarts, Crosbie, Simcox, Bruen and Higgins are all represented, with Jimmy Bruen claiming four consecutive titles from 1938-1941.  There was a gap of four years during the war and Redmond Simcox won his fourth title in 1947 when the competition resumed.  Simcox was one of three golfers to win the title five times, GF Crosbie and Denis O’Sullivan being the other two.  Jimmy Bruen won it four times, as did Tom Cleary and JD McCormack. 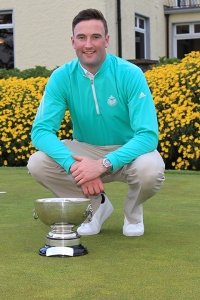 The competition was played as a matchplay event for many years, and when it was subsumed into the Munster Strokeplay in 2006 it became a 72 hole strokeplay competition.  Conor Doran (Banbridge) won the initial staging, and Niall Gorey (Muskerry) went on to win three of the next five titles.  Barry Anderson (The Royal Dublin) added to his 2014 title last weekend and in doing so joined a small elite group of multiple winners in the past 40 years.