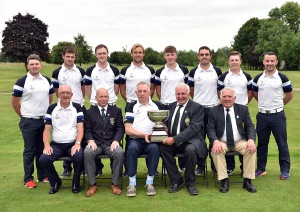 Munster had a very strong closing performance in the final day of the Senior Interprovincials.  They won both sessions to claim a win against Connacht which gave some satisfaction after two tough days.  Foursomes wins from O’Keeffe and McCormack meant that the pair were unbeaten in three matches.  Gary O’Flaherty and Geoff Lenehan picked up their second win as a pair and Jack Pierse and John Murphy secured a half to win the session.  Afternoon wins from O’Keeffe, Lenehan, Griffin, Pierse and O’Flaherty secured the win for Munster.  Unfortunately Munster could only finish 3rd, losing a spot on the countback to Ulster.  The third place probably didn’t reflect how close Munster came to a win.  They were within one match of halving with Leinster and Ulster battled back to claim a half on Tuesday.  Leinster completed their first hat-trick since 1964 by winning a third successive Interprovincial Championship at Carlow.

Not since that great side of the ’60s won four on the trot from ’62 to ’65 have Leinster managed such a streak. And with three wins on the board, this was a thumping success.

Following wins against Munster and Connacht, Leinster only needed to halve with Ulster in order to retain the title but they made certain anyway, victorious for the third day running.  Dominant in the morning foursomes, winning three matches, Leinster needed just two more points. And with comprehensive wins for Conor Purcell, Jonathan Yates and Mark Power at the top of the order, Seamus McParland’s side were celebrating once again.