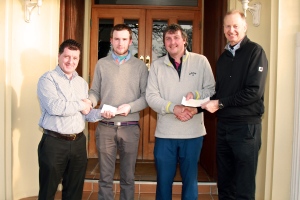 The Munster PGA held their first event of 2015 this week when the Wilson Golf Singles took place in Cork GC on Monday.  Despite heavy rain on Sunday night, the sun was out on Monday morning for the competition.  16 holes were in play and the scoring was keen even though the course was playing long.  Despite the weather there was a full timesheet with the winter series again proving popular with PGA professionals from all over the province.  David Ruddy and David Ryan took the honours as they both finished on three under par.  Ruddy who is based in Thurles Golf Club had been putting together a great round, he was six under for 13 holes but finished with three consecutive bogies.  The early start however was enough to give him a share of first place.  It was a first win for both Ruddy and Ryan in the winter series.  Ryan was prolific winner on the Munster and national circuit over the past two years and his win will no doubt signal a return to form.  Bandon’s Paddy O’Boyle put together a great round to finish in third place on one under and Wayne O’Callaghan was fourth on level par.  Killarney’s Danny Sugrue moved to pole position in the Order of Merit thanks a fifth place finish on +1, he was joined by David Hayes and John Sugrue.  The over 45’s prizes was shared by Martin Ward and Liam Burns. 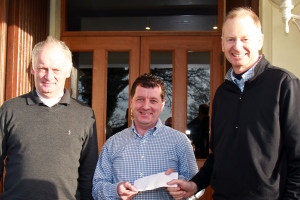 Sugure moved to the top of the Premium Golf Brands Order of Merit although Monkstown’s Cian McNamara is a close second.  Davey Barry (Douglas) is third and John McHenry and Wayne O’Callaghan are fourth and fifth respectively.  PGA Munster Captain Liam Burns thanked everyone for another successful PGB Winter Series event: “It’s great to see so many players out supporting the event.  Considering the weather overnight the course was in exceptionally good and credit is due to the course staff.  It’s always to play in Cork Golf Club and we always a great welcome in Cork from Matt Sands and Peter Hickey.  I also want to thank Gary O’Flaherty and Wilson Sporting Goods for their sponsorship of the event.  Without the support from our sponsors the events wouldn’t go ahead.”  The winter series moves to Co Clare for the next event which takes place in Dromoland in early February.