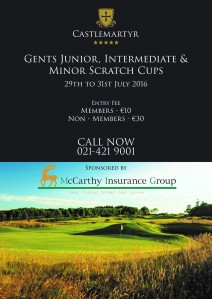 Castlemartyr Golf Club will hold its annual scratch cups weekend from Friday 29th July  to Sunday the 31st.  This has proven to be a very popular weekend in the past for golfers and the club are expecting large numbers again this year. Last year saw numbers exceeding 400 over the three days.  The scratch cup weekend caters for Junior, Intermediate and Minor golfers and there will be a total of €2,500 worth of prizes up for grabs.  Once again Castlemartyr Golf Club will be partnering with McCarthy Insurance Group who will be sponsoring this event. The McCarthy Insurance Group  have sponsored this event for the past four years and are one of the main reasons why it has been such a success.

Last year the spoils went to Kevin Dorgan of Cork GC, Conor Hayes of Slievnamon GC & Bernard Wallace of Kinsale GC  with each respectively winning the Junior, Intermediate and Minor scratch cups.  Club Captain Tony Loughnane is hoping that there will be a home victory amongst this years winners.  Castlemartyr’s Director of Golf Brady Sherwood is delighted with the investment that has gone into the course this year, and the results that have been seen: “The golf course is in the best condition for years, we’ve had an average of 130 golfers for our Wednesday Whites open singles and we’ve got a lot of praise for the course set up”.  The popular PGA professional reports that membership has increased in both the ladies, gents and junior sections, and he urges everyone to get out and play the course: “There’s only a few months left in the season, if you haven’t enjoyed Castlemartyr Links in 2016, you need to add it to your must play list – you won’t be disappointed!”