Brian Attridge in action this morning

Mallow pulled off a great win today in the AIG Senior Cup, defeating Cork on the final hole in the final match.  Brian Attridge won the 16th and 17th to move from one down to one up and he held his advantage on the par three 18th to record a memorable win at home for the North Cork club.

Earlier in the afternoon, Paul McCarthy led out the side against Cork’s John Hickey.  Hickey won the 1st and held onto the lead after the 2nd, but that was the only time that he would be ahead.  McCarthy won the 3rd and 4th to take the lead and although Hickey levelled it twice, McCarthy took the lead back.  He was two up on the 17th tee and although Hickey won that hole, McCarthy halved the 18th to secure the first point for Mallow.  James Sugrue added the second point soon after.  Like the first match, Cork had the early advantage with Ian O’Flynn holding a one hole lead up to the 6th hole.  Sugrue levelled it on the 7th and went ahead on the 9th.  He went two up on the 13th but O’Flynn pegged him back on the 16th.  Sugrue was five under to that point and he eagled the 17th to go two ahead and win the match. 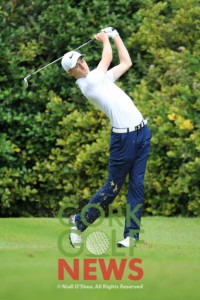 Cork’s Paul Tobin added a point for Cork, he went one up on the second hole and held a lead until he closed out the match with Greg Barrett on the 16th.  Gary O’Flaherty made it 2-2, he had a great start winning the 1st and 2nd, but Conor Dowling fought back winning the next four holes.  Dowling was three up at one stage but O’Flaherty stayed in touch.  He won the 11th, 13th and then the 16th to level the match.  The experienced Cork golfer also won the 17th to go one up and held that lead on the 18th to win his match.  That made it 2-2, with the match destined to be settled between Brian Attridge and Mark Ford.

This was another tight match with Attridge going one ahead early on. but never managing to build up a lead.  The Mallow man was two up through nine but by the 15th it was Mark Ford who led by one hole, and the fear was the pressure of playing an experienced Cork side would crush the Mallow challenge.  Attridge fought back, helped in no small part by holing out from a bunker on the 16th.  That levelled that match and he went ahead on the 17th.  A well placed tee shot on the 18th saw him finish no more than 10 feet from the hole.  Ford was 20th feet away and when he missed birdie putt, Mallow celebrated their win. 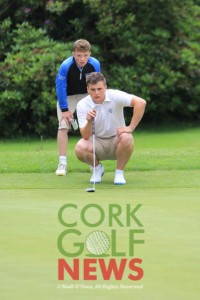 Mallow now look forward to an August date in Tralee for the Munster finals.  Team managers Andy Daly and Ciaran McKenna will have a hard job ahead, the panel of eight are all in with a shout of a start.  Ed Walsh was away with an Irish team this weekend, Adam Boland played this morning and Liam Dowling is also part of the squad.  Mallow are now starting to reap the rewards from their hugely successful juvenile programme that saw them win the Fred Daly Trophy in 2015.