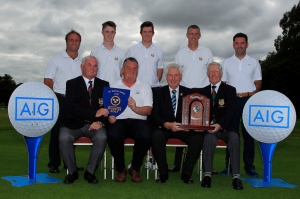 Tralee Golf Club will host the AIG Cups & Shields finals this weekend with three Munster pennants on offer.  It’s eight years since Tralee have hosted the finals and Arnold Palmer designed links will provide a spectacular setting for the three finals.  Two competitions are down for decision on Saturday with Cork and Mallow in action.  Cork will be hoping to retain their Munster title in the AIG Barton Shield, but they’ll have to get past hosts Tralee in the semi-final.  Waterford Castle face Castletroy in the other semi-final.  Mallow unseated holders Monkstown and beat a good Cork side in the Senior Cup and they’ll be hoping to maximise their first appearance at the Munster finals in several years.  Ballybunion carry Kerry hopes in the AIG Senior Cup, the West Munster winners will face Dungarvan who were the winners in the East Munster section.  Limerick came through in North Munster and they will face Mallow who won through from South Munster.

On Sunday the AIG Junior Cup takes place and Ballybunion are back in action, that will be their fourth appearance at Munster finals this year.  They face Ballykisteen while Ennis take on Bantry Bay in the other semi-final.

In total, 172 matches have been played in 20 venues across the province to reach the final stages.  All 12 teams will be hoping to advance to the AIG Cups and Shields national finals which take place in Carton House in September.